The University of Salford’s exercise physiology testing service is aimed at runners or cyclists who want to learn more about their fitness and how to improve it. Knowledge of your fitness allows for realistic training zones to be set, making training more effective at improving performance.

Once we have made your appointment, you will need to go the University of Salford online shop where you can make the payment for the service.

Tests include use of specialist equipment for the following:

Prior to booking a test, we will discuss with you your requirements and advise accordingly.

All clients will need to complete a physical activity readiness health questionnaire as pre-test screening prior to visiting lab to ensure they are eligible to perform the test.

Testing will take place in our Exercise Physiology lab. You will be required for around 30 mins to 1.5 hours depending on the test you perform. This will be followed up with a report specific to the test.

A Lactate Threshold test identifies blood lactate transition thresholds which can be used to develop athlete training zones.  These refer to the intensity you train at which can be given as a running speed, power output or heart rate. These thresholds are good predictors of endurance performance and are sensitive to training.

The first threshold occurs at the exercise intensity at which blood lactate begins to rise above resting levels, termed Lactate Threshold (LT).  It marks the shift from purely aerobic (low intensity) exercise to exercise that requires some anaerobic energy contribution (moderate intensity) that produces lactic acid. Training intensity at or below LT is relatively low and one should be able to maintain it for a prolonged period of time (hours).

The second threshold occurs at a higher intensity than LT and represents the highest intensity (power output or running speed) that one can maintain for 30 minutes or so.  At intensities above this, lactic acid would accumulate quickly to levels that would limit your ability to continue exercising because of fatigue.

The highest amount of oxygen an individual can use during exercise is known as maximal oxygen uptake (VO2max) and indicates one’s aerobic potential. This is the gold standard measure of aerobic capacity. This test also measures your peak aerobic power or running speed along with maximal heart rate and the data can be used for setting training intensities. The test is a maximal test that will push you to exhaustion. 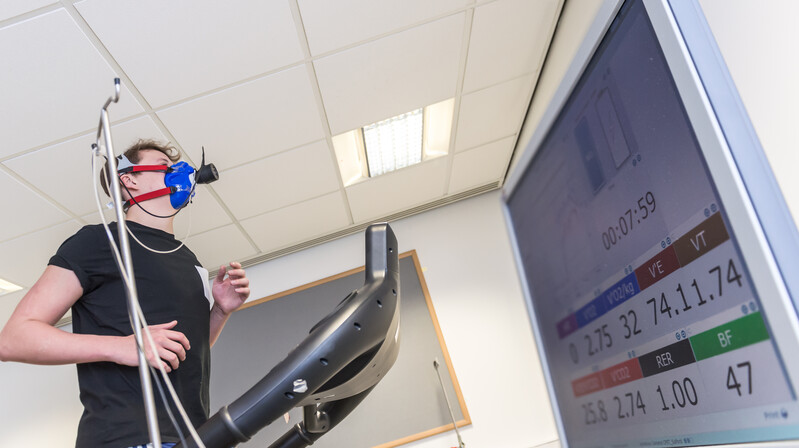 Running economy (RE) is the energy required to run at moderate running speeds – this is assessed by measuring oxygen uptake. The lower the energy required (so lower oxygen uptake) to run at a particular speed, the better your running economy and the more efficient you are.  It is a useful test to undertake at the beginning and end of a training cycle to gauge improvement. 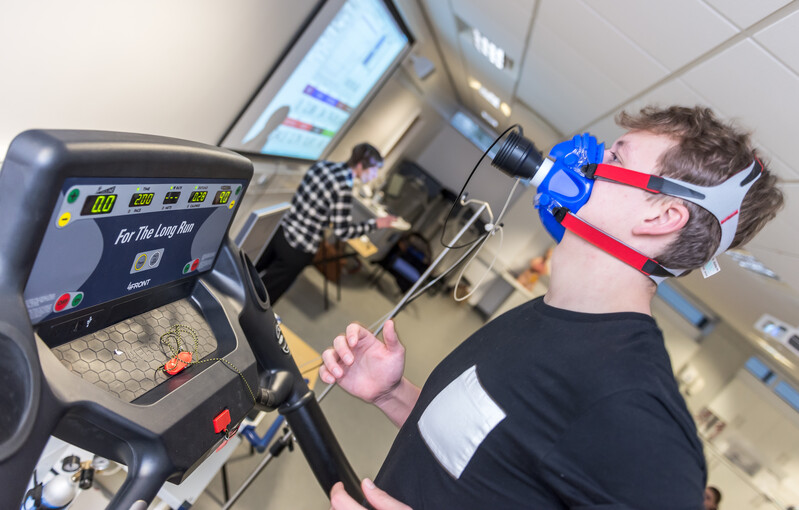 Using our BodPod, we can determine body fat percentage and fat-free mass (muscle, bone, organs). This is a highly accurate test which can detect small changes in body composition so can be used to measure the success of nutritional interventions and/or exercise programmes.  Resting metabolic rate can be estimated too along with total energy expenditure.

Clients sit relaxed in the BodPod chamber for a few minutes whilst 2-3 short readings are measured.  In brief, the BodPod measures the volume of air displaced by the body.  During this process you may hear some minor sounds of valves opening and closing and you may be aware of some slight air pressure changes in the chamber.  These measures are used, along with a very accurate measure of your weight, to calculate body density and finally body composition.  It is a safe and comfortable procedure.

To ensure accuracy, the following instructions are important:

A report detailing your results will be available immediately.

Using our breath-by-breath gas analysis machine, you will wear a gas sample mask to allow respiratory measures to be determined which are used to calculate the number of calories you use at rest (resting metabolic rate) and during exercise.  This method is called indirect calorimetry.  This can be useful if you are balancing energy intake and expenditure for a desired goal, for example, weight loss.  The number of calories you expend during exercise can be measured on a treadmill or on a stationary bike.  We can also measure heart rate at the same time, this way we can advise on the number of calories you are likely to use at certain heart rates.  Again, this is useful if you have a particular calorie deficit target.  Furthermore, if you currently use a device that estimates your energy expenditure, we can assess how closely that monitors calories used.

To ensure accuracy, the following instructions are important: 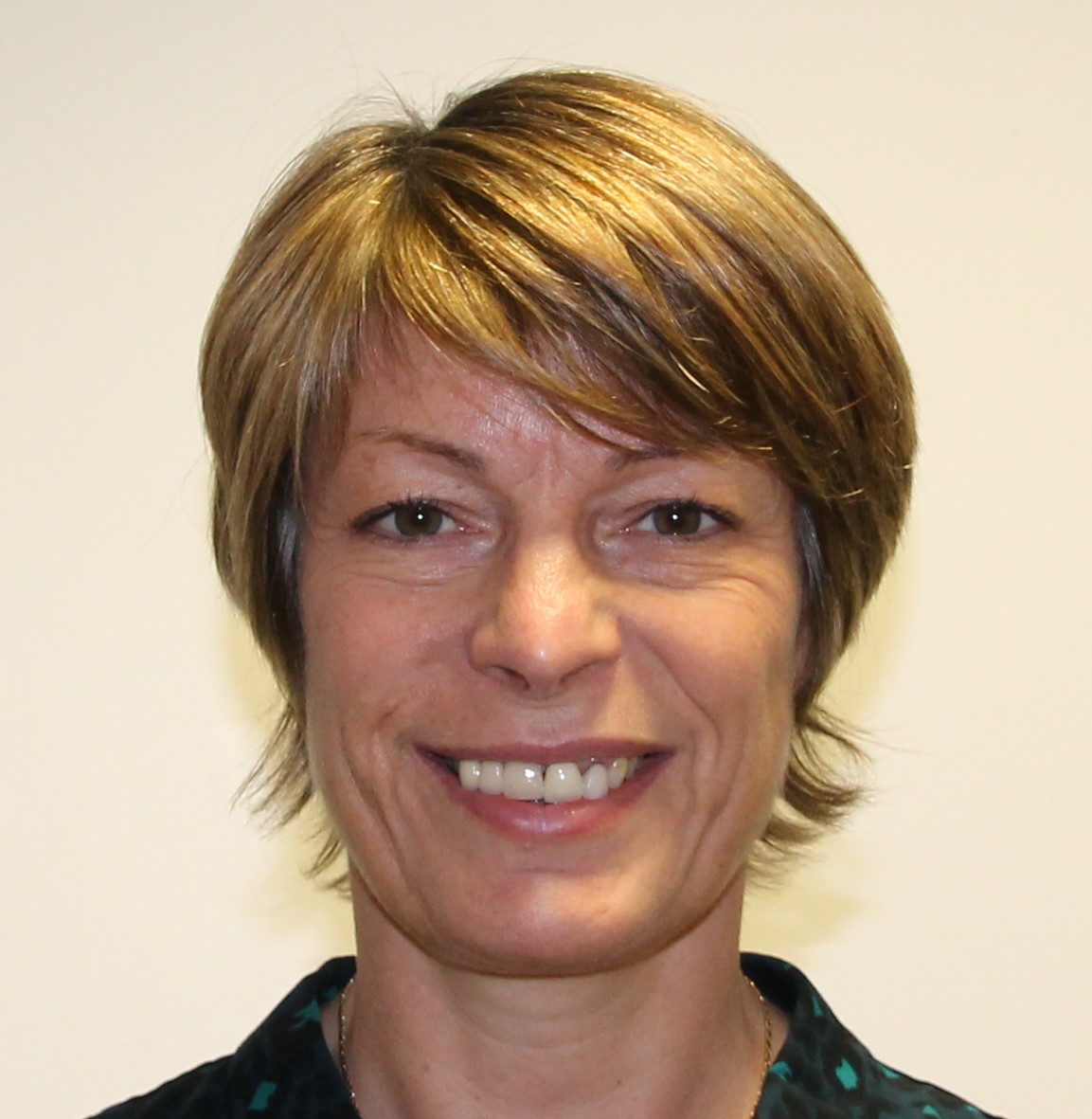 Clare is a Senior Lecturer in Exercise Physiology at the University of Salford and has worked at the University since 2000. As an accredited sport and exercise scientist with the British Association for Sport and Exercise Sciences, she has experience of working with cyclists, runners, and triathletes carrying out a variety of endurance based physiological tests over many years.  Clare is a keen sports person herself, her passion being cycling. 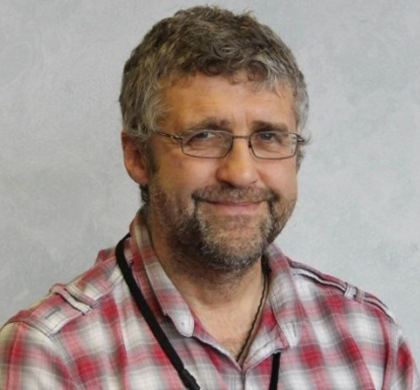 As an active road cyclist and mountain biker, Dr Steve Atkins has a long-time interest in how best to optimize performance. With over 80 publications in peer-reviewed journals, he has undertaken research into the determinants of performance, including use of advanced technologies to optimize data measurement in cycling. As an accredited sport and exercise scientist with the British Association for Sport and Exercise Sciences, Steve has worked with many elite and amateur athletes.

Laura is a Demonstrator / Research Assistant at the University of Salford and has worked at the University since 2008. She has experience of carrying out a variety of endurance based physiological tests over the years across varying levels of athletes. Laura enjoys a variety of sporting activities, including running and cycling (both road and mountain) and has completed a variety of events including 10k runs, 5k swims, half marathons and the Manchester 100 cycle ride.

Please note that all potential clients are required to complete a Physical Activity Readiness health questionnaire prior to visiting the lab to ensure eligibility for completing any of the exercise tests. Some underlying conditions can mean that one is not eligible to perform certain tests. In some cases, a letter will be required by a potential client’s GP to confirm their eligibility.

The Exercise Physiology lab operates within the Mary Seacole building in room MSG17 which is on the ground floor.  There are changing rooms and showering facilities in the building.

Car parking is available at the University (fees apply). The University is conveniently located for Salford Crescent train station and is well served by bus services.