Our Sustainable Construction Policy provides a framework for sustainability in our construction projects. Our objectives are:

In delivering our commitment, all new building and major refurbishment projects will be assessed under formal sustainability schemes such as the Building Research Establishments (BREEAM) or Ska methodology to ensure energy efficiency and sustainability is maximised.

The decision to proceed with the particular scheme and rating (BREEAM/Ska) will be made following a feasibility stage cost and benefits analysis. As a minimum ALL projects should meet the University of Salford Energy Design Standard.

Our role is to manage a project from conception to completion...

As a Future Enabler, one of the key pan-university projects that will enable us to deliver the university’s vision, is our Campus Masterplan. Our aspirational vision for the next two decades will tap into the area’s unique potential to deliver a place to learn, live, work and visit. Our campus will link with local industry, as well as cultural and residential schemes to create a city district that enhances surrounding communities and helps to drive the economy both locally and regionally.

Environmental sustainability is a core element of the Campus Masterplan. Central to the plans is an energy strategy that takes a major step towards a zero carbon future, while providing high quality spaces for residential, teaching, research and commercial uses that are cost-effective to run. University of Salford buildings will undergo refurbishment to make them highly energy efficient, with maximum potential for renewable energy generation. To find out more about our Energy Strategy see our Carbon, Energy and Water pages.

The Masterplan will also look for opportunities for new green spaces in our urban environment to help promote learning, wellbeing and healthy lifestyles as well as consolidating and rationalising car-parking to reduce internal car circulation and promote a healthier, more pedestrian-friendly campus. The vision also promotes greater levels of cycling in and around the site. Improved pedestrian connections will be key to improving permeability across the campus – think tree-lined boulevards, public squares and a generally more well-defined network of routes and open spaces.

This building provides a new home on Peel Park Campus for the departments of music, performing arts and art & design, which were previously spread across several sites. The building facilitates creative cross-disciplinary working which enables the University to offer unique educational opportunities to students. 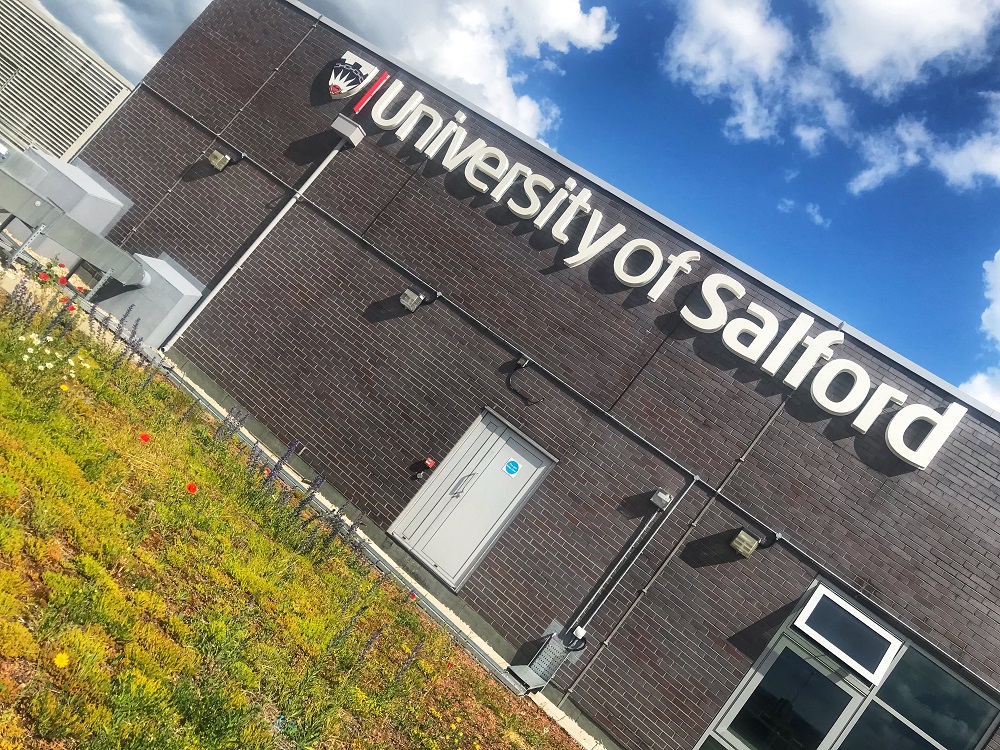 In 2016 and 2017, our Clifford Whitworth Library underwent a major refurbishment. The theme of the refurbishment was the “library in the park”, celebrating the fact that the University of Salford benefits from an attractive green campus, overlooking the historic Peel Park (the first municipal park in the UK).

The design incorporated elements which drew playfully upon this theme, such as a raised garden area with deck chairs, and park “pavilions” providing a focal point for activity on each floor. Previously, rather rigid study areas were replaced with light and airy spaces, with a variety of attractive technology-enabled study areas which allow students the freedom to learn in ways that feel comfortable.

As well as these benefits for the health and well-being for the users, extensive LED lighting was installed with a dimming facility attached to presence detection to enable energy savings of approximately 20% on the previous lighting design, giving 1.5 tonnes of carbon savings a year. 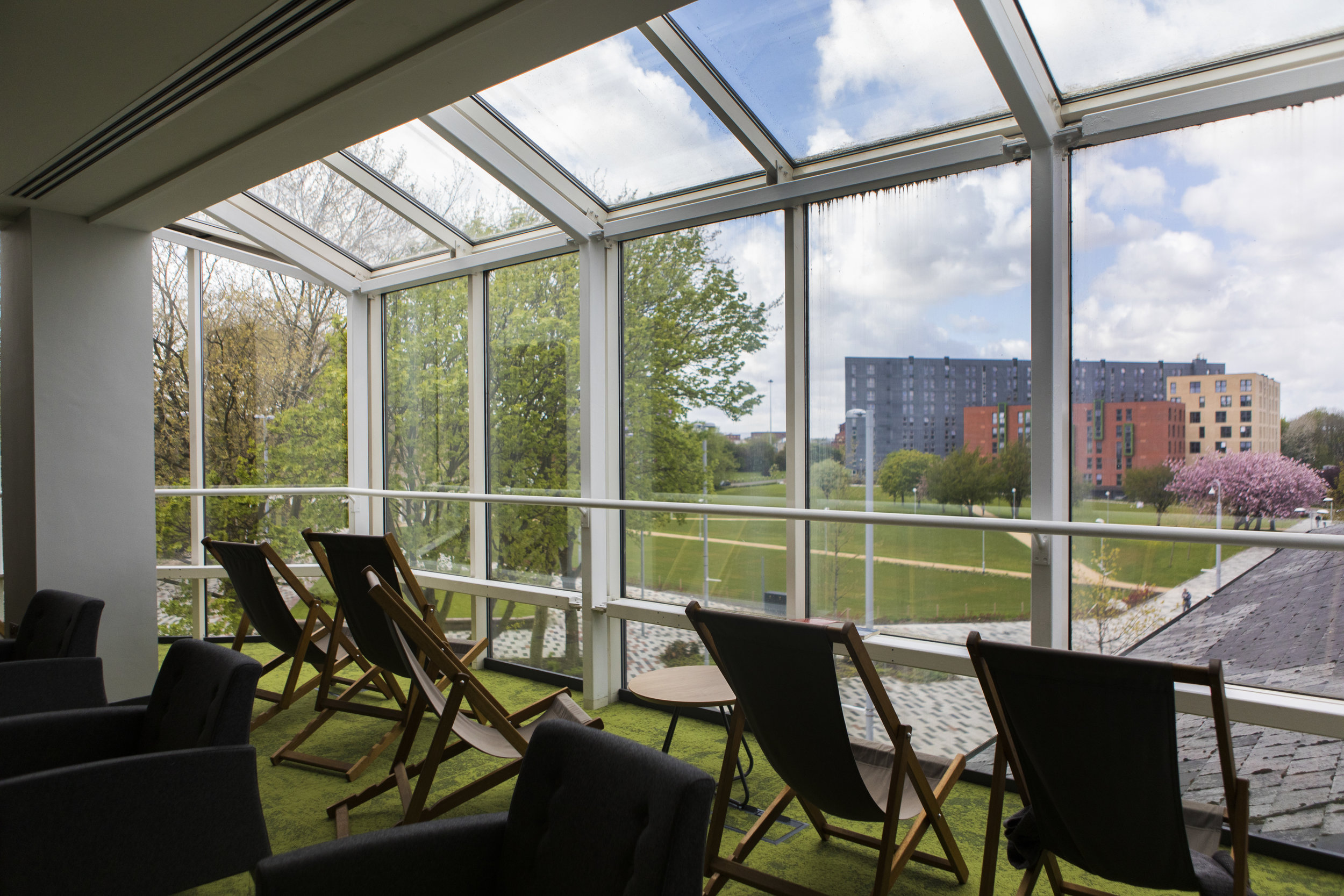 Working with the local community, the University, Salford City Council and the EA identified an opportunity to come together to use land owned by the University and the council to create a basin that will manage peak flows in the river Irwell, reducing the risk of flooding. The land which was the University’s sports fields was excavated with the material used to build an embankment around the basin. Rising river water flows over an inlet weir and is retained by penstocks until levels downstream subside and the water can be safely released back into the river. Works started on the project in March 2015 following extensive consultation with local community and environmental groups. Monthly sessions have continued over the life of the project with the feedback from community groups developing the end product. Examples of this include improved access arrangements, interpretation, habitat development eg otter holt provision and artworks.

The anticipated financial benefit to the local area from the scheme is at least £12m, including avoided costs of rehabilitation after flood events. In addition to reducing the flood risk from 1:75 to1:100 years, the scheme has created a 5.5ha wetland habitation, designed by The Wildfowl & Wetlands Trust with input from the community steering group. Approx. 5km of new paths have been created around the basin which will provide a valuable asset for the local community.

As part of the negotiations the University has agreed to exchange its sports pitches for council owned pitches adjoining the University campus. Whereas the University pitches have been exclusively for student use, all the pitches will be available to the community. The University’s grounds maintenance regime has improved the quality of the community pitches and will continue to improve the amenity value. Recently a 3G pitch has been added and the development of which included tree planting in line with our 2 for 1 tree replacement policy and a flood lighting scheme which was designed to be sensitive to bat activity in the area.