In 2020, the Environmental Sustainability and Grounds Management Teams, along with colleagues in Estates and Facilities, developed a 5-year Landscape Management Plan for 2020/21-2024/25.

Our Plan is reviewed and updated regularly, and it serves a framework for improvement of our management of the outside spaces on campus and enhancing biodiversity. It is submitted as part of our Green Flag Award application.

Find out about our progress so far, and the ongoing initiatives, in the video and information below. 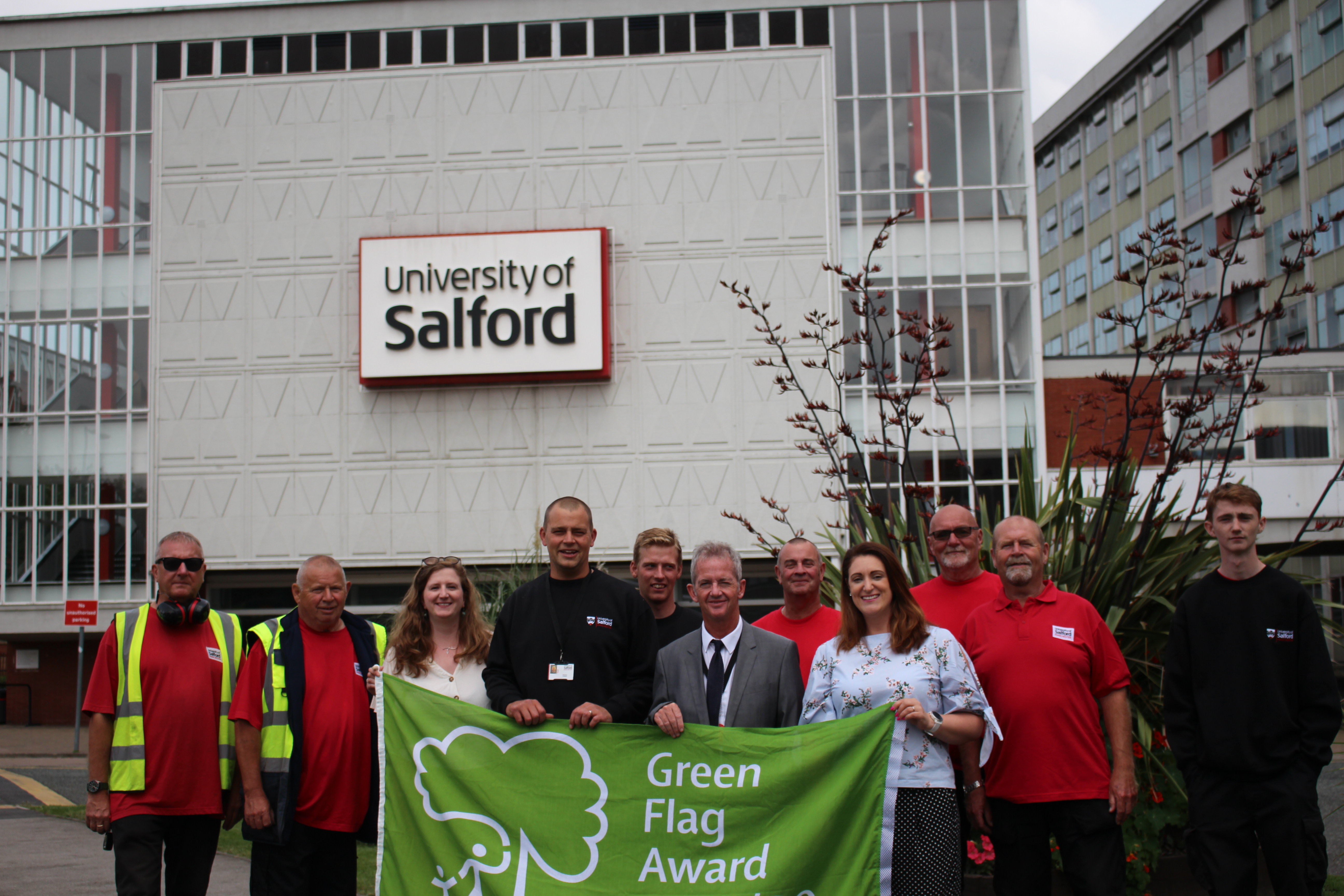 On July 16 2019, University of Salford was recognised by the Green Flag Award Scheme as one of the very best green spaces in the world.

The Green Flag judges described the University’s Peel Park and Frederick Road campuses as an impressive, diverse collection of sites with excellent facilities and features that complement each other well, including David Lewis Playing Fields and a selection of high-quality public art.

We raised our first Green Flag outside of The Old Fire Station at our 2019 Sustainability Awards. We have maintained the Award every year since.

Find out more about our Green Flag Awards on the University news website and the Environmental Sustainability blog.

In previous Green Campus Group meetings, we have asked for suggestions for improvements and asked participants to pick their top three suggestions, so that we can initially focus on taking these ideas forward. 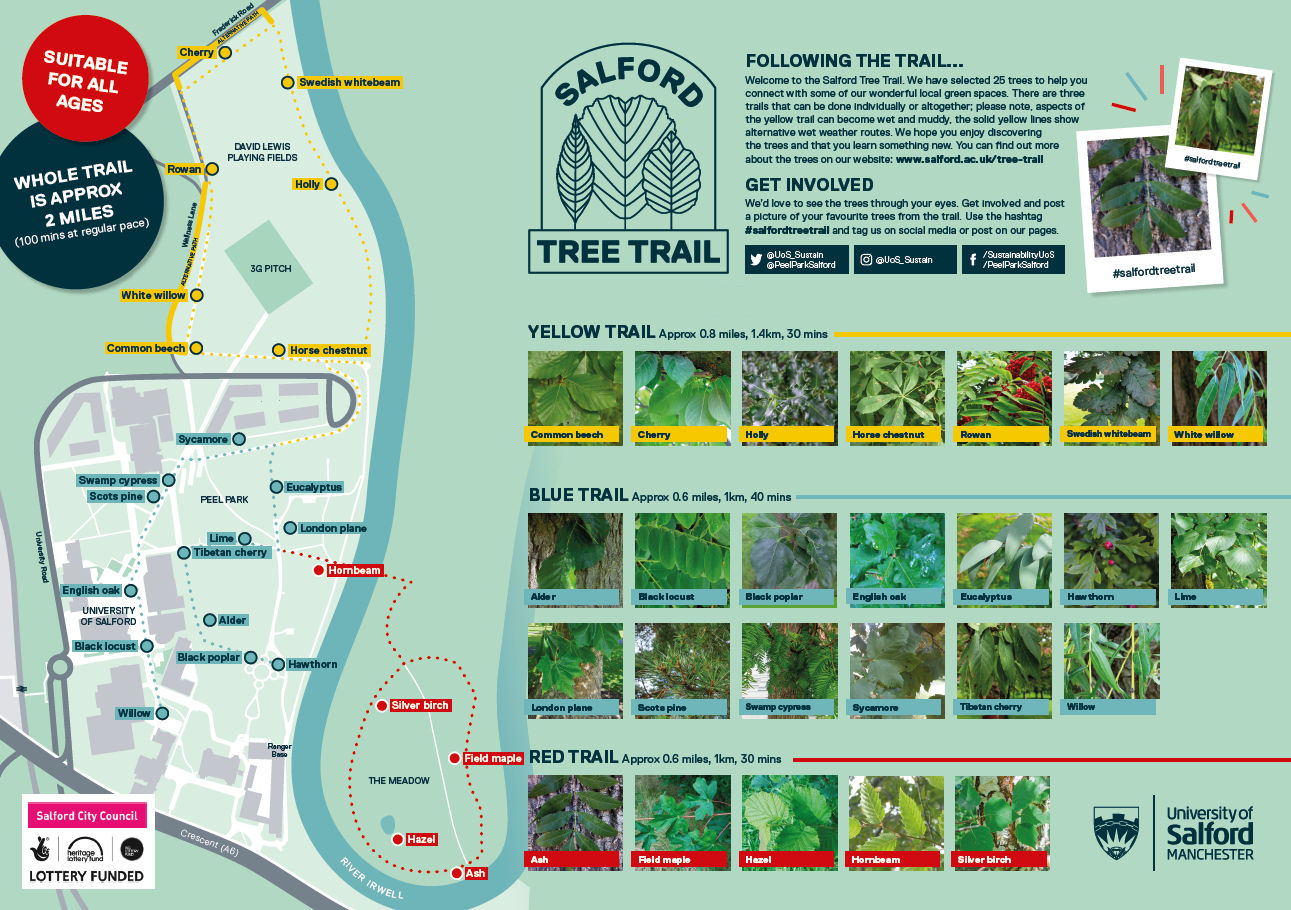 The Tree Trail was first developed for the University campus in 2011 by student Oliver Bishop and presented in his dissertation. The original trail has been updated and developed into what is now known as the Salford Tree Trail. It incorporates 25 trees and takes users around the main campus, Peel Park, David Lewis Playing Fields and Crescent Meadows.

You can find all information about the Tree Trail, including a map, routes and tree species. Each tree along the trail has its own plaque with a QR code, which can be scanned to access information about each species.

The current version of the Salford Tree Trail is a result of collaboration between various teams from within and around our University, including the Environmental Sustainability Team, Salford Ranger Team (Peel Park), Maker Space, and students from the School of Arts, Media and Creative Technology. 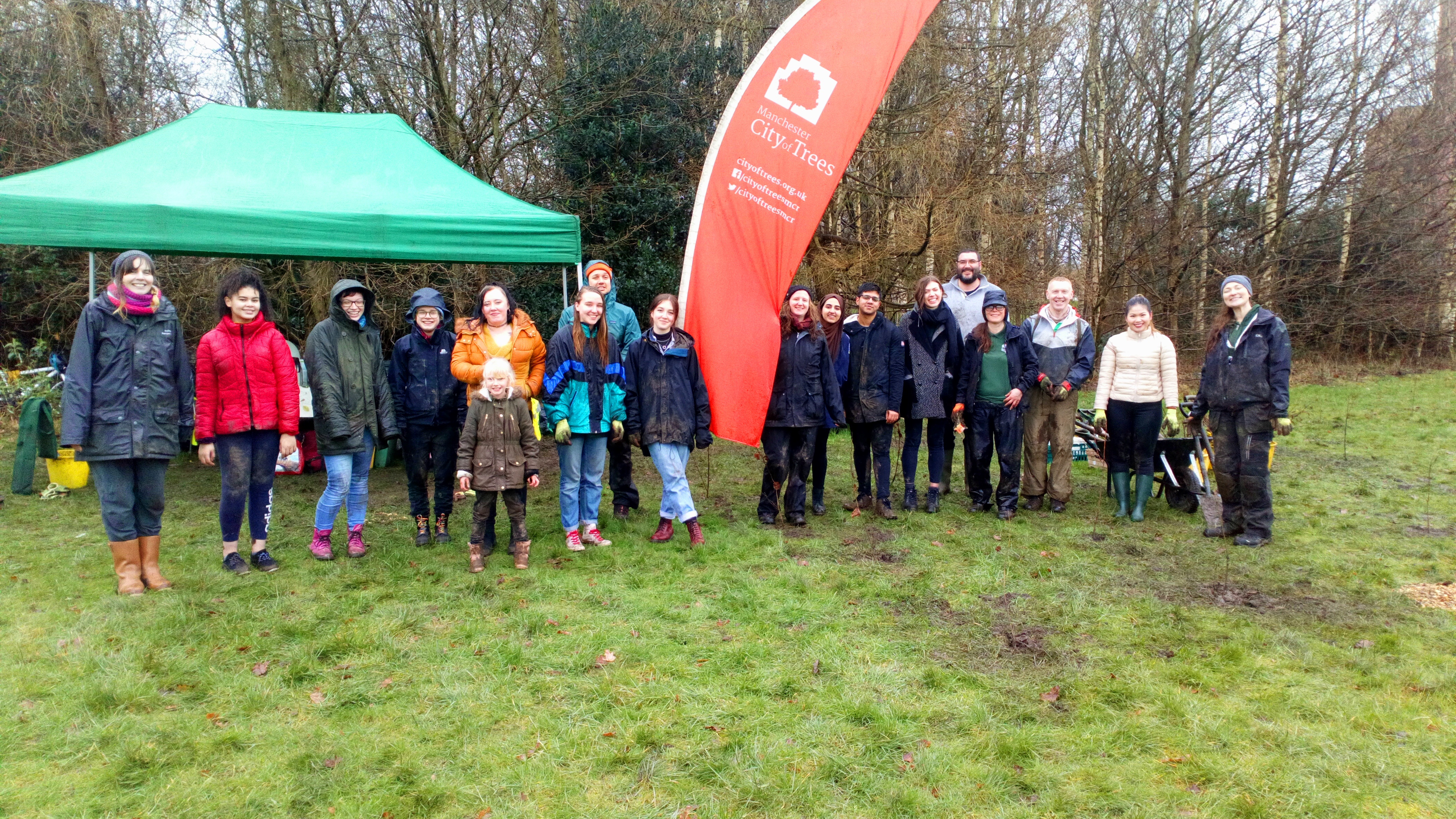 Biodiversity, or biological diversity, is the variety of life! This includes variety in habitats as well as diversity in species and the ecosystems in which they occur. Biodiversity is important because of the essential contribution that it makes to the functioning of our planet and because of all the benefits that it provides, from foods and medicine to climate regulation. Contact with biodiversity and the natural world has also been linked to improvements in health and emotional wellbeing.

Despite being just a mile and a half from the City of Manchester, the main site of the University of Salford is a leafy, riverside campus adjacent to Peel Park and the River Irwell. There are a large variety of trees on campus including Sycamore, Birch, Willow, Whitebeam, Cherry, Norway Maple, Oak, Hawthorn and London Plane.

The Grounds Maintenance Team prioritise native species for new planting and wildflower seeds are used instead of bedding plants in some areas. We have a two for one tree policy, which requires the planting of two trees for every one removed.

Our annual sustainability engagement programme, Go Green Salford, has over the years included lots events relating to biodiversity, including a winter tree identification walk, hedge-laying and tree planting sessions with City of Trees at David Lewis Playing Fields and Crescent Meadows (in total we planted over 700 tree whips!). We are planning more tree-planting projects in the future.

Bird boxes are located on some trees across the Peel Park campus, including in the Clifford Whitworth Library courtyard, which also contains two small bug hotels. The IGNITION Living Lab also features a number of bug hotels and bird houses on the Living Wall. Another research facility on Peel Park campus, the Z House, also features houses for swifts, bats, and hedgehogs, as well as an insect hotel. We continue to aim to increase the provision of bird boxes, bug hotels and other wildlife habitats on campus.

The newly launched Community Growing Space was also created to increase biodiversity. Apart from wildflowers and herbs growing in the raised bed planters and in the ground, the space also includes bird feeders and a bird house to invite wildlife. We're also planning to include an insect hotel and a pergola with a green roof.

Biodiversity on our doorstep 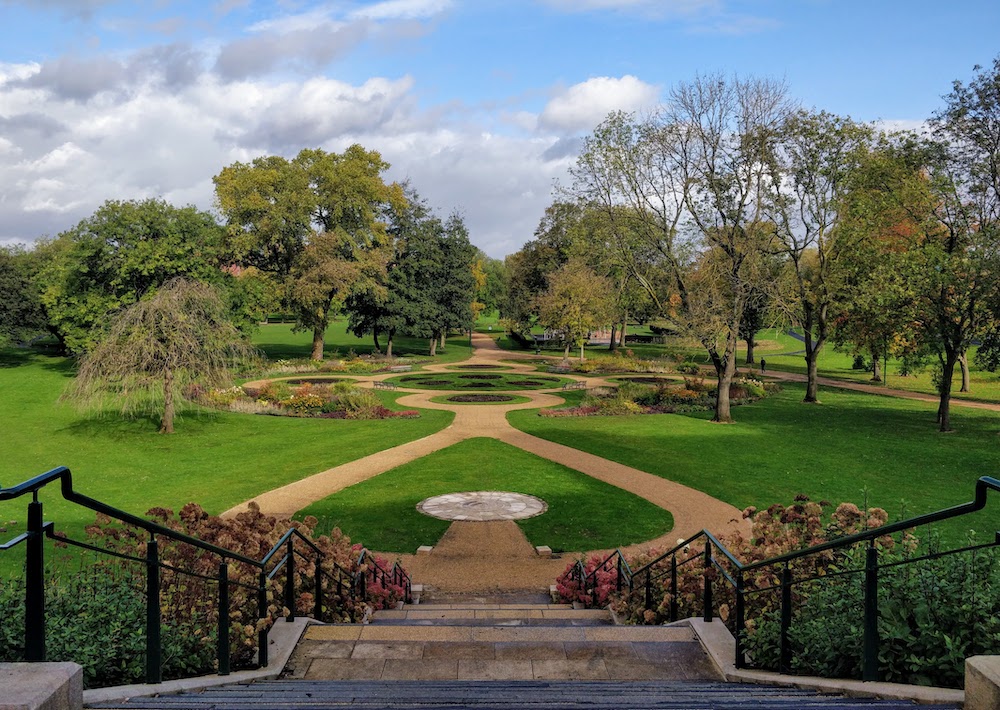 There are lots of outside spaces on campus that you can use, such as the Community Growing Space and David Lewis Playing Fields, but we are also lucky to have Peel Park, the Crescent Meadows and the River Irwell on our doorstep. Find out about events and activities in Peel Park on their Twitter, Facebook and Instagram.

The Kersal Wetlands are also not too far from campus, a brilliant habitat for lots of wildlife, particularly birds. The wetlands are part of the Salford Flood Improvement Scheme and are built on the former University of Salford Castle Irwell sports campus. A land swap was carried out between the University and Salford City Council in 2016, with the University gaining David Lewis Playing Fields in exchange for Castle Irwell.

If you are interested in helping to keep Salford clean and friendly for wildlife, we recommend getting involved with Salford Litter Heroes. You can find out about their upcoming litter picking events on their Twitter and Facebook pages.

A survey of habitat types was conducted in 2014 to produce a baseline of habitat areas using the Biodiversity Index, an online survey and calculation tool developed by University of Northampton. We have a written summary of our habitat baseline and a report from a Biodiversity Student Placement.

We have conducted a number of hedgehog surveys as part of the Hedgehog Friendly Campus programme (no hedgehogs were spotted). We've also run a two-day BioBlitz event for 26 and 27/03/2022, in collaboration with Peel Park (Salford Ranger Team) and the Wildlife Society. The results were submitted to the Greater Manchester Ecology Unit.

If you see any wildlife on campus, please let us know! Email us with the following information:

Use these websites to help you correctly identify what you see: