University of Salford award honorary 'dogtorate' to Wilson (the Labrador)

First year student Emily was excited to receive her Welcome Pack through the post, but it seems her four-legged friend was even more excited. 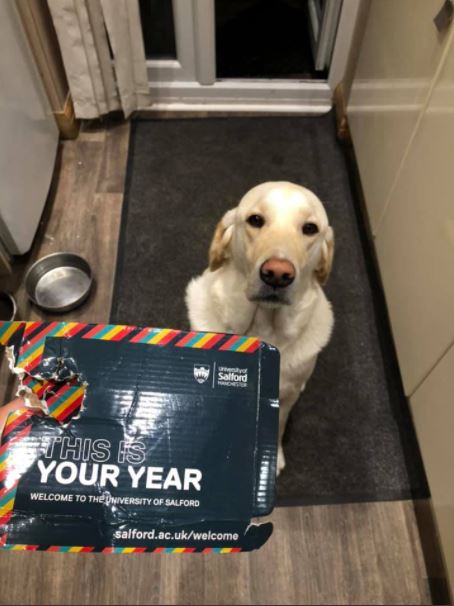 No sooner had her pack dropped through the letterbox, Labrador Wilson ripped it open, leaving a chewed-up box in his wake. Seems the excited pooch thought he had university pet-tential.

When the Social Media team heard about this they were quick to send out another pack to Emily, but of course couldn’t leave out newfound University of Salford enthusiast Wilson. Our top dog honorary student went crazy for his gifted crew treats.

As well as winning the hearts of the whole Marketing team, Wilson has been getting a lot of love on social media, with a massive 14k likes on Twitter and hundreds more on Facebook and Instagram, along with comments including “This is actually perfect”, “Wilson, you beauty” and “Starting the Wilson fan club. Entry requirement: x1 treat (for Wilson).”

Emily is also delighted that “her dog is twitter famous”.

A University of Salford spokesperson said: "We know how difficult it can be for students to leave their pets when they head off to university, and it looks like they feel the separation just as much! No-one could resist those puppy dog eyes, so we sent Emily another Welcome Pack to make sure she was prepared for her new life at Salford, and some extra treats for Wilson to chew on instead."