Andrew Hartley, Director of Legal and Compliance at the University of Salford, has been awarded a top Counter Terrorism Policing accolade for his work supporting vulnerable students transitioning into university. 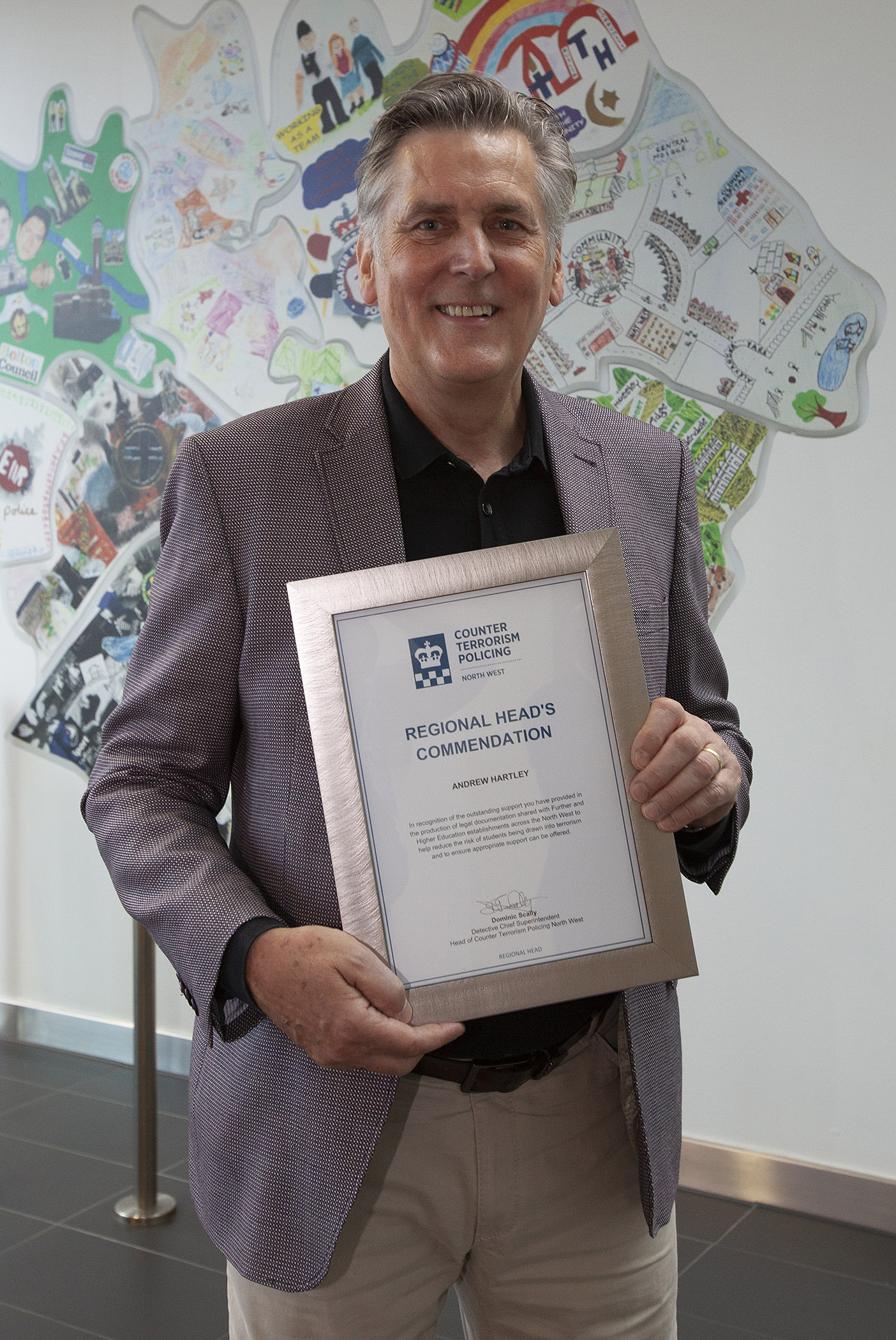 Andrew received the Regional Head’s Commendation Award by Counter Terrorism Policing North West (CTPNW) in recognition for his work related to Prevent under the Counter Terrorism and Security Act 2015, which helped resolve a gap in sharing information between agencies that would otherwise inhibit the effective safeguarding of individuals vulnerable to radicalisation.

Working as the University’s Prevent lead and Data Protection Officer since 2018, Andrew was approached by CTPNW and the Department for Education’s (DfE) Regional Coordinator for Prevent, who highlighted concerns about a couple of north west based college students who were progressing into higher education and had known vulnerabilities under Prevent.

These students had been receiving support from the authorities that was due to stop when the students reached the age of 18 and transitioned into university. GDPR/privacy concerns meant that police and colleges were not able to share sensitive information with the universities that they would be attending.

Andrew explained: “Under Prevent, public authorities, including education institutions have a duty to prevent people from being drawn into terrorism. Working alongside CTPNW and the DfE, I devised a pathway which formed a balanced and proportionate compromise between Prevent and GDPR and that allowed information about vulnerable transitioning students to be shared.

“I also lead a task group consisting of representatives from other north west universities, from Manchester college, the police and the DfE. Through my leadership of this group, an appropriate information sharing protocol was put in place between all the relevant stakeholders.”

The DfE is now looking to roll out this protocol over a wider area and eventually, nationally.

Commenting on his award, Andrew added: “I was very pleased to receive this award. It has been a really interesting exercise, working closely with our university partners in Greater Manchester, the Department for Education and the police to overcome barriers and resistance to sharing information that essentially had the objective of supporting young people and underpinning their welfare. It's great that our work in this important area has been recognised in this way.”

Andrew was presented with the award by Head of CTPNW, Detective Chief Superintendent Dominic Scally, at Greater Manchester Police Headquarters.

DCS Dominic Scally, said: “I am very pleased to award Andrew a Counter Terrorism Police North West Commendation. Andrew worked closely with my Officers to identify and successfully resolve what was clearly a gap in sharing information between agencies that would otherwise inhibit the effective safeguarding of individuals vulnerable to radicalisation.

“Andrew used his expertise and his legal knowledge to produce the guidance documents to fill this gap. Such work is vital in ensuring that a vulnerable person is safeguarded effectively, and this work has been shared across the UK. It also amplifies the fact that CTPNW work closely with a wide range of partners and I am really keen therefore, to ensure that our Awards are extended beyond just those who work for Counter Terrorism Police.

“Safeguarding support to vulnerable young people is a vital part of national effort to reduce the risk to the UK from Terrorism, and it is often the work of experts like Andrew that make it possible to protect the vulnerable from harm.”