New research has demonstrated that, contrary to popular belief, relative brain size in mammals is not solely linked to intelligence but is driven by various evolutionary pressures on body size, including adaptations caused by mass extinction and changes in climate.

The international study – the largest of its kind ever carried out – involved a team of 22 scientists, who investigated 1,400 living and extinct mammal species. In the UK, this involved Dr Dorien de Vries from The University of Salford, Dr Jacob Dunn and Max Kerney of Anglia Ruskin University (ARU) as well as academics based at UCL and the Natural History Museum.

Published in the journal Science Advances and led by academics from Stony Brook University in the US and the Max Planck Institute of Animal Behavior in Germany, this groundbreaking study has pieced together a unique timeline of how brain and body size has evolved over the last 150 million years, showing how “big-brained” species have attained their extreme proportions in different ways.

Great apes have a wide range of body sizes but have demonstrated a general trend towards increases in both brain and body size. In comparison, ancestral hominins, which represent the human line, have shown a relative decrease in body size and increase in brain size compared to great apes.

The study found that most changes in brain size occurred after two cataclysmic events in Earth’s history. After the mass extinction event at the end of the Cretaceous period 66 million years ago, the researchers noticed a dramatic shift in relative brain-body size in lineages such as rodents, bats and carnivorans, as these animals filled the empty niches left by extinct dinosaurs.

Roughly 30 million years later, a cooling climate in the Late Paleogene period led to more profound changes, with seals, bears, whales, and primates all undergoing evolutionary shifts in their brain and body size. The likes of elephants and great apes evolved their extreme proportions after this climate change event.

As well as demonstrating that brain size relative to body size has not followed a stable evolutionary trajectory, the study also shows that relatively big brains, long considered an indicator of animal intelligence, can be the result of a gradual decrease in body size to suit a new habitat, climate, or way of moving. In other words, relative brain size may have nothing to do with intelligence at all.

The study reveals that the California sea lion attained a low brain-to-body size because of the strong selective pressures on body size, most likely because these aquatic carnivorans diversified into a semi-aquatic niche and their body increased in size at a faster rate than their brain as they adapted to also living on land.

Dr Jeroen Smaers, an Evolutionary Biologist at Stony Brook University and first author on the study, said: “At first sight, the importance of taking the evolutionary trajectory of body size into account may seem unimportant. After all, many of the big-brained mammals such as elephants, dolphins, and great apes also have a high brain-to-body size. But this is not always the case. The California sea lion, for example, has a low relative brain size, which lies in contrast to their remarkable intelligence.”

Dr Dorien de Vries, Research Associate at The University of Salford said: “When we look closely at our data, some shared events, such as migratory histories, resulted in different responses in the brain-body evolution of parallel mammalian groups.

“Our research shows that New World monkeys such as squirrel monkeys, tamarins, and howler monkeys underwent several evolutionary shifts in their body size and brain size. This group of monkeys originated from a common ancestor that migrated from Africa to South America, and one could easily speculate that these evolutionary shifts may have been a response to the different ecological pressures and opportunities they encountered in South America.”

She added: “What is intriguing to me, is that a parallel mammalian group – the New World hystricognath rodents that includes capybaras, guinea pigs, and chinchillas, also originated from a common ancestor that dispersed from Africa to South America roughly around the same time – show no evolutionary shifts in their brain and body size relationship. It is fascinating that even though these New World rodents underwent a great evolutionary diversification in the number of species as well as their biological adaptations, from the terrestrial guinea pig to the arboreal New World porcupine, they all maintained the ancestral relationship between brain and body size seen in all hystricomorph rodents. This is in stark contrast with what we see in New World monkeys, that showed several shifts in their brain and body size relationship throughout their evolutionary history.”

The different colours indicate groups that have a different brain-to-body relationship. 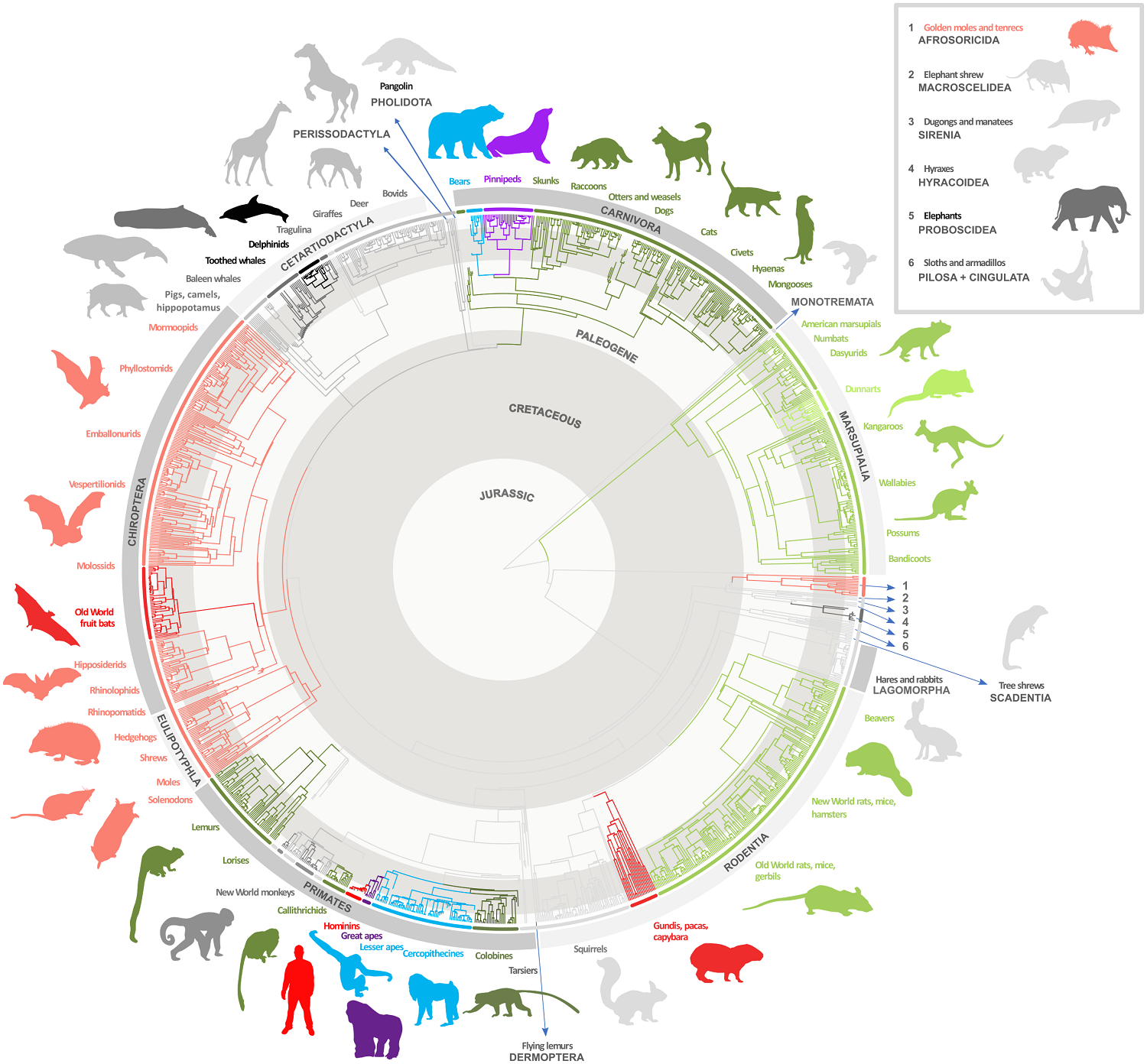 Two of University of Salford students have been shortlisted for Apprentice of the Year at...

School of Science, Engineering and Environment
07.02.23

School of Science, Engineering and Environment
17.01.23
All news