Journalism students, David Poucher, Rhys Blanchard, Charlotte Hardman, and Kathryn Austin were interviewed by ITV’s Mary Nightingale about their views ahead of the Leadership Debate yesterday. 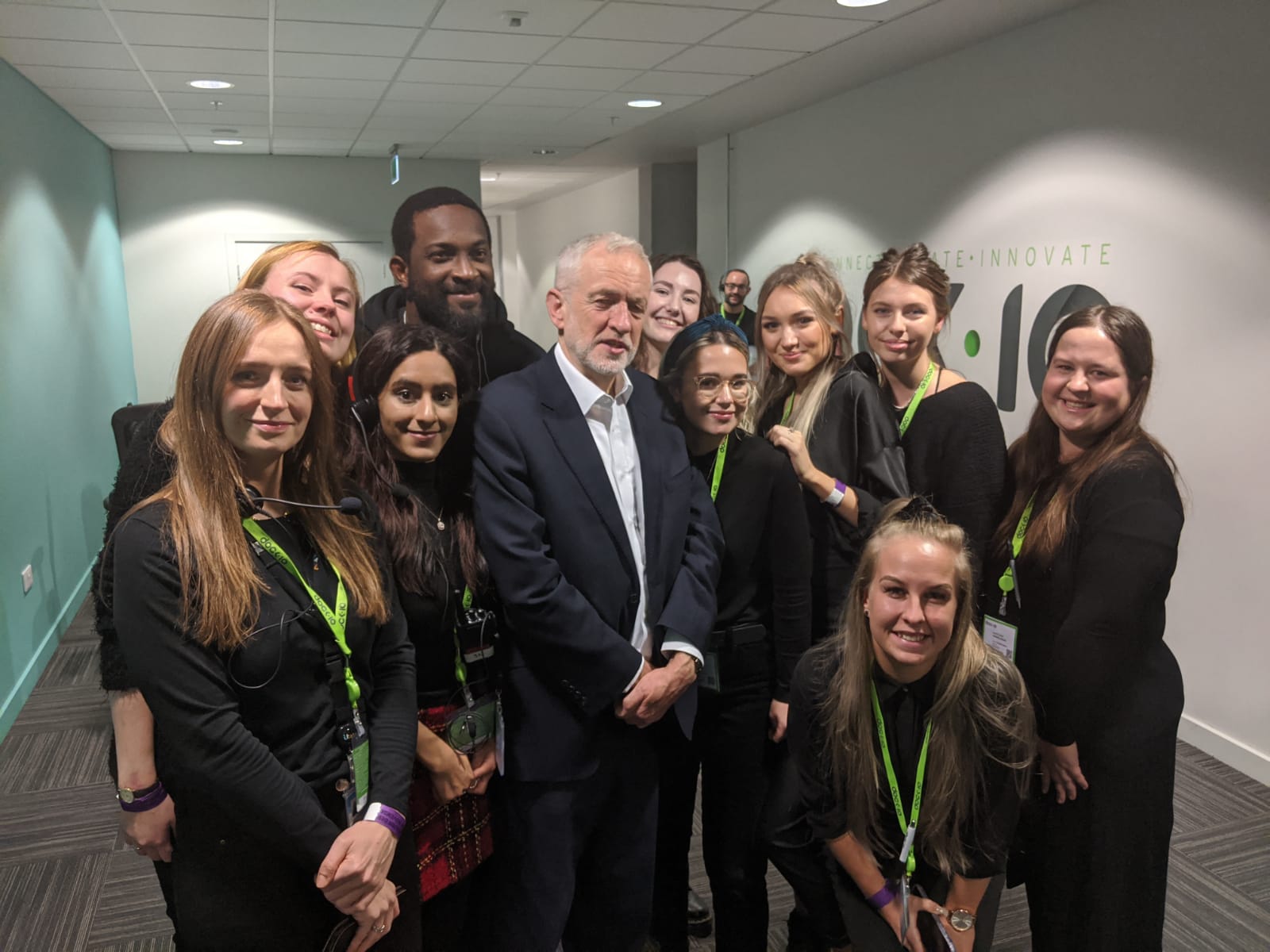 The students discussed with Mary what they hoped to hear from Johnson and Corbyn during tonight's debate.

Speaking about the experience, David said: “It was amazing to meet Mary Nightingale. I was so excited, and it was an amazing opportunity. It’s just another example of how Salford helps its students break into the industry!”

Rhys added: “It’s not every day you get to talk to Mary Nightingale on national prime time TV, it was a great opportunity…Definitely one for the CV!”

The interview was broadcasted on ITV Evening News which 1,129,001 viewers tuned in to watch.

MA Production Management for TV, Film and Digital Media students were also among those who helped run the Debate.

One of the students who worked on set, Charlotte Walsh, said: “Last night was a really good experience. Being involved in something that will be a part of history forever is really special and the work experience is a bonus. All the crew at ITV treated us well which made the day even better.”

She added: “Meeting Jeremy Corbyn was very surreal, I didn’t expect him to come over to us when he was leaving but he spared a few minutes to speak to us all and thank us for the day which he didn’t have to do but he did!”

“I’ve never worked on a live production before, but the atmosphere was amazing, really well done to everyone at ITV they absolutely smashed it!”

Samantha Wilson, another Production Management student who was involved said: “Last night was an incredible experience, and I was really grateful for the opportunity. There was high security which intensified the pressure because there was so much at stake if things went wrong. I was surprised at how much responsibility I was given at times considering I was a runner. I felt honoured to have so much responsibility.”

“My highlight was looking after Jeremy Corbyn's dressing room making sure they had everything they needed such as food and drinks.”

“This was my first time working on a live TV show and the fact it was such a high-profile show was an amazing opportunity. I was nervous at first because I worried, I might get lost in Doc10 but all of the staff at ITV were super helpful and put me at ease straight away,” she added.

After the debate, Jeremy tweeted: “Thank you to all the worker at ITV for putting on a fantastic debate tonight! #LeadersDebate”. He also posted the same to his Instagram.

Beth Hewitt, Director Media Industry Engagement, Partnerships & Portfolio Development said: “This is exactly what we hope our students will be able to do in their time with us - opportunities such as this are so important for their development, their networking and their learning. We work hand in hand with industry and there is a huge amount of trust between us after nearly 10 years of being based in MediaCityUK and this is really paying off.”