Last week we joined our friends at Islington Mill for the launch of Suprema Lex – Salford’s Strategy for Culture, Creativity and Place in Salford. 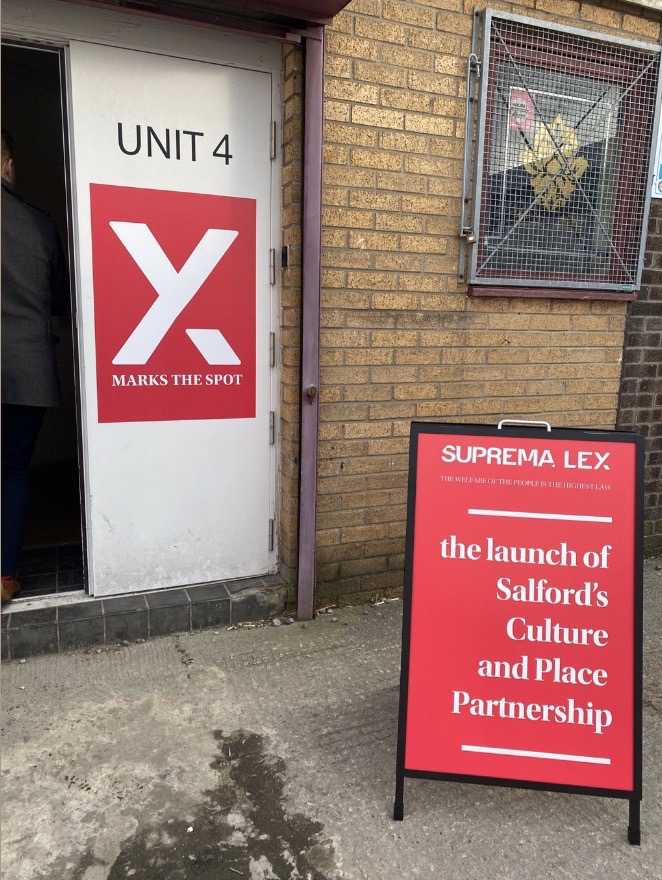 The Suprema Lex strategy focuses on five areas, with ‘People’ as the central pillar that unites the strategy as whole. These areas include:

Lots of colleagues from across the University were in attendance. On arrival guests were greeted by a DJ and a drinks reception before speeches and presentations. City Mayor Paul Dennett started the night by discussing the vision he hoped the strategy would bring for Salford.

He said: “It’s a strategy to democratise culture and ensure those who produce our culture are not exploited. The strategy encapsulates what we want to achieve here in Salford as it has always been a working town of makers and do-ers and in many respects it runs in the water and in our blood.”

Also, in attendance was Jackie Kay, Chancellor of the University of Salford and Scots Makar. She said: “The University of Salford has a central role to play in convening creative, social, academic and economic forces for the benefit of our city, so I am delighted that we have been able to support the Salford Culture and Place Partnership in the launch of this strategy. As a civic university, contributing the cultural and creative opportunities on offer in Salford is critical to helping to make Salford an even better place to live, work, visit and study.

“Through the redevelopment of our campus and the surrounding area – the Salford Crescent masterplan – we are already working with partners in the city to deliver a cultural quarter for Salford. Our campus alone is home to a vibrant new theatre, performance spaces, recording studios and music venues, and we are surrounded by heritage and cultural assets, such as Salford Museum & Gallery and the Working Class Movement Library.

“At the heart of our vision for the future is the regeneration of Maxwell Hall; home to memories of the past as the venue played host to iconic bands such as Blondie and The Smiths during the 70s and 80s, we want to bring Maxwell Hall back into use as a leading modern music venue and cultural hub not just for Salford, but for Greater Manchester and beyond.”

The launch event also shared details of Stage Directions, a £1 million ACE-funded project supporting children and young people across Salford. The School of Arts and Media were are heavily involved in the project, with colleagues like Connoll Pavy and Georgia Lynch bring Salford young people into New Adelphi Building each week to teach them digital art skills like film making, editing and after-effects, for instance.