We have increased capacity for our January 2022 intake for BSc (Hons) Nursing / RN Adult by 50 places. For information on how to apply, please see here.

Swapping office life for frontline nursing is a ‘dream come true’ for Siobhaun Smith (pictured below). 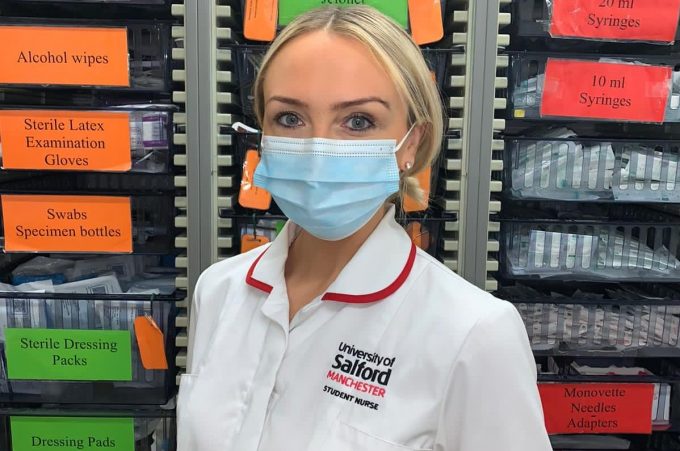 After previously working in recruitment, Siobhaun’s role in research at the Northern Care Alliance – first as PA to the director and then as administrator for the cancer research team – inspired her to take the plunge and retrain as an adult nurse.

She’s had to show bags of determination and make some sacrifices, but says the rewards more than make up for it.

Before beginning her nursing studies at the University of Salford, she had to combine her work and being mum to daughters Isla and Lottie, aged six and three, with a pre-nursing access course at Pendleton College.

“It was a struggle studying for three GCSEs and the pre-access course but I knew what the end goal was and I was determined to get through,” she said. “And it stood me in good stead for when I started the adult nursing BSc course, I was a lot better prepared for the academic work.”

Her university degree began in January 2020 and the fast-paced course meant Siobhaun learned a lot of new skills quickly. She was looking forward eagerly to her first placement when the Covid-19 lockdown intervened.

Understandably, placement providers wanted more experienced staff as they adjusted to the extra demands of the pandemic so Siobhaun and her fellow students had to wait to get hands-on experience.

But at the start of November she was thrilled to start work at Salford Royal, working with the team on a female surgical ward for six weeks.

She explained: “It’s so rewarding, the other staff are really helpful and I’ve learned so much in just a few weeks. I’ve been able to do so much, not just personal care and observations but also wound care, taking out catheters and cannulas, medication rounds and giving injections.

“The patients are amazing too, they’re very welcoming and happy to let me learn – they really appreciate that the next generation of nurses need to gain experience on the wards. It’s very humbling.”

Although Siobhaun had a well-paid and successful career in recruitment before becoming a mum, she’s clear she’s made the right choice in moving into nursing: “I know I will be a bit older when I qualify, but I’ll still have at least 25 years of working so I want to do something I really enjoy and value,” she said. “I want to give back to the NHS as well. I had IVF before I had my daughters and that’s something I’ll always be grateful for.”

How do we make sustainable and equitable ecosystems for...

The University of Salford’s Social Prescribing Hub is hosting a conference this Thursday –...