In memory of Her Majesty Queen Elizabeth II

The University would like to express our deep sadness at the passing of Her Majesty Queen Elizabeth II. We send our heartfelt condolences to the Royal Family.

Her Majesty first visited the University in 1954 and held a close link to the University through the late Royal Highness Prince Philip, who served as the first University Chancellor from 1967-1991.

In addition to this, Her Majesty The Queen also officially opened the country’s leading digital and media hub, MediaCity, here in Salford in 2012.

A book of condolence is open to the public, in The Old Fire Station on the Crescent, from 8.00am to 6.00pm from Monday 12 September. We welcome our local community, students and colleagues to visit.

As an institution we look back on memories of Her Majesty with great fondness. Below you'll find a selection of connections and visits to our University from our Archives.

70 years ago, the Salford Royal Technical Institute marked the Coronation of the Queen in 1953 by decorating the outside of the now Peel Building (below). It was the first Coronation to be televised and watched by 27 million people in the UK and millions more from around the world.

In 1961, Her Majesty Queen Elizabeth II and her late husband, Prince Philip the Duke of Edinburgh formally opened the Royal College of Advanced Technology Salford based in the newly constructed Maxwell Building (below). The creation of the Royal College marked a turning point in the history of the institution as it was one of ten colleges nationally that gained elevated status and approval to award degree programmes at university level. 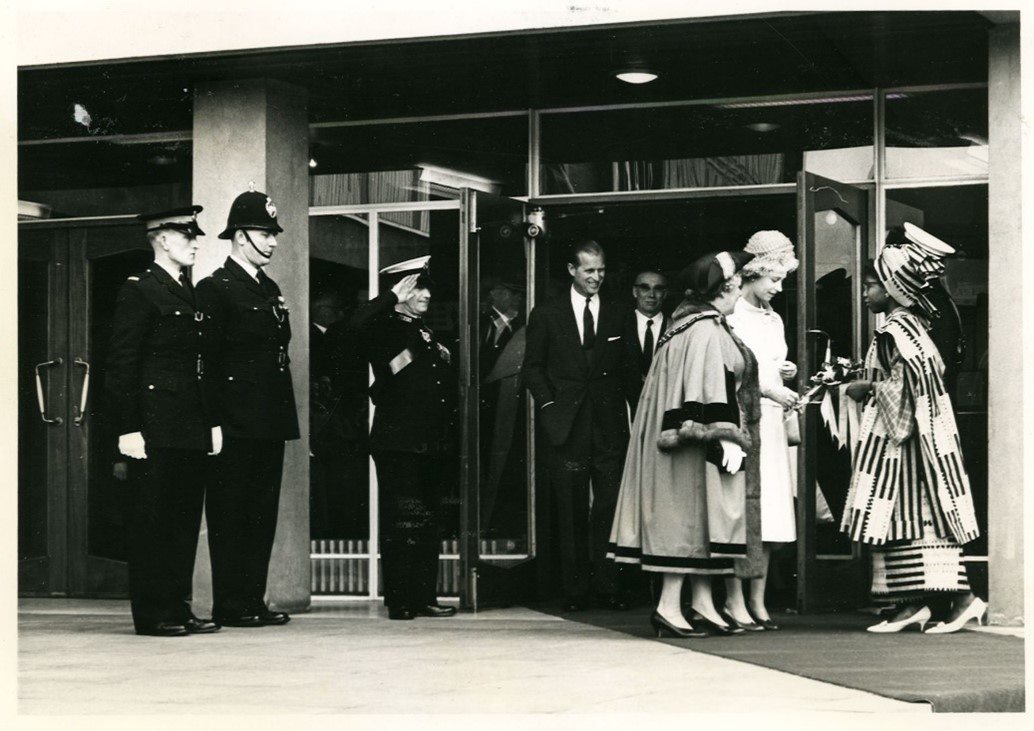 Reports of the official opening of the Royal College of Advanced Technology on 24 May 1961 describe how the Queen formally opened the College from the stage in Maxwell Hall (below) by ‘pressing a button to unveil a commemorative plaque’. The Royal party was given a tour of the new building which included the state-of-the-art physics and electrical engineering laboratories. Outside, Salford City Police Band entertained guests and onlookers as they gathered along the Crescent for a peek at royalty.

For a Wednesday in May, it was also marked with glorious sunshine. The day was so relaxed that one onlooker, a small boy, was so in awe of proceedings, even forgot to wave his brightly coloured Union Jack flag for the Queen! It too later transpired that he’d mistaken the principal and chairman of the governors, both in their ceremonial robes, as the Pope and Bishop of Salford.

In 1967, when the institution was granted University status, Prince Philip was installed as the University of Salford’s first Chancellor, a post he held until 1991. According to our records in 1977 the University marked the Queen’s Silver Jubilee by planting an oak tree close to library on our main campus.

We were also delighted to be joined by Her Majesty The Queen in the opening of Salford's MediaCity in 2012 (below).

The new IntoUniversity centre in Salford is working closely with local schools and the...

Our valued partner Morson Group, the Salford-based talent specialist, together with the...

Alumnus Nic Humphries on supporting his alma mater to s...

The newly opened IntoUniversity at the Beacon Centre in Salford is on track to improve the...