Nursing Associate Eleanor Mears (pictured below) has been studying on her apprenticeship course for over a year now, and at first wasn’t convinced it was for her. But a chance encounter during lockdown led to her putting her skills into practice to save a child’s life, and now she has been named ‘Apprentice of the Year’ by the University of Salford. 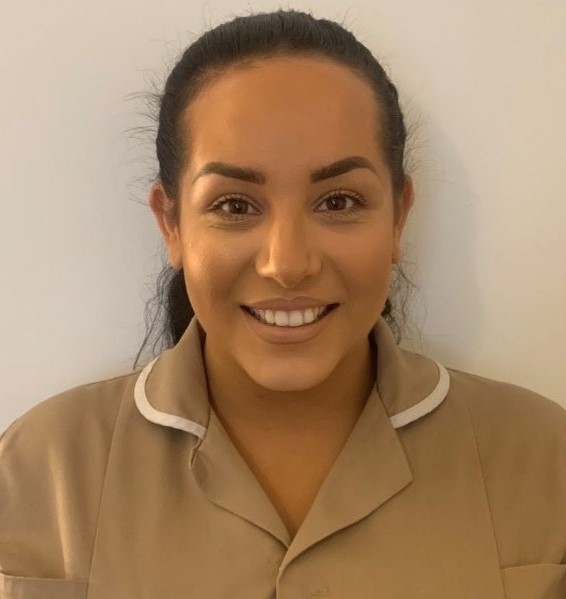 Eleanor told us: “I never knew what I wanted to do when I left school. I worked in retail, but never felt I had found my calling until I got a job at a care home. I loved looking after people and being able to make a difference to someone's life. The Nursing Associate apprentice course was perfect for me – with paying my mortgage and bills it would have been hard for me to quit my job in order to study.

“When I first started the course, it was a struggle to manage juggling university and full-time work, especially having been out of education for so long. But the university and my clinical educator gave me so much support and positivity. I am so glad I stayed as now I love it!”

Eleanor’s nursing skills were put to the test a few weeks ago, as she was out walking the dog with her partner. As they were changing into their walking boots in the car park, they heard a ‘huge bang’ and screaming.

The training Eleanor had received kicked in immediately, and she sprang into action. “I realised I needed to go and offer my skills to help, so I threw everything into the car and went running to see what had happened. As I got out onto the main road, I could see a seven-year-old boy had been run over. He was unresponsive and not breathing. My training and everything I had learnt at university came flooding back, and I checked to see if the airway was clear and started rescue breaths and compressions.

“After what felt like hours, an air ambulance arrived as well as the paramedics; the doctor instructed me to carry on with my compressions, while he administered oxygen and gave out orders to others.”

Despite being exhausted and emotional from providing CPR, Eleanor stayed on hand to help comfort the casualty’s family once the paramedic team took over.

The police told Eleanor afterwards that if it hadn’t been for her quick actions providing CPR and first aid at the scene, the child may not have survived. The serious nature of the incident has affected her deeply.

“Since it happened, I’ve been struggling to sleep, felt worried leaving the house on my own, been having nightmares and just generally over-thinking a lot. I’ve had a lot of support from work and the university as well as my family and friends, which has got me through. I’ve also had to accept that I needed to take some time away from work to take care of myself, and am now just doing a few hours a week, which has helped.

“After lockdown I’m hoping to climb Snowdon to raise money for the amazing air ambulance and Aftermath Support group who have helped me get through this, and raise awareness of how important it is that people learn basic first aid – a lot of other people who were on the scene of the accident said that if I wasn't there they wouldn't have known what to do. Delaying first aid could have been the difference between life and death, so it is so important people have these skills.”

Now Eleanor has been awarded the title of ‘Apprentice of the Year’ by the University of Salford as part of their celebrations for National Apprenticeship Week (8-14 February 2021).

Nicole Blythe, Clinical Educator at the University of Salford, who nominated Eleanor for the award, said: “Eleanor has received nothing but praise from her assessor and her managers about her hard work, dedication and enthusiasm, and she has become a great asset to her team. Eleanor is a fantastic role model with great communication skills and her engagement to develop her knowledge, skills and behaviours is exemplary. Her recent actions in saving the life of a child who had been involved in a car accident are truly inspirational, we are so proud of her!”.