University of Salford international scholarship student and Country Director of Exceed Worldwide in Cambodia, Sisary Kheng, has played an integral part in the provision of the prosthetics used on Chhouk the Asian elephant. 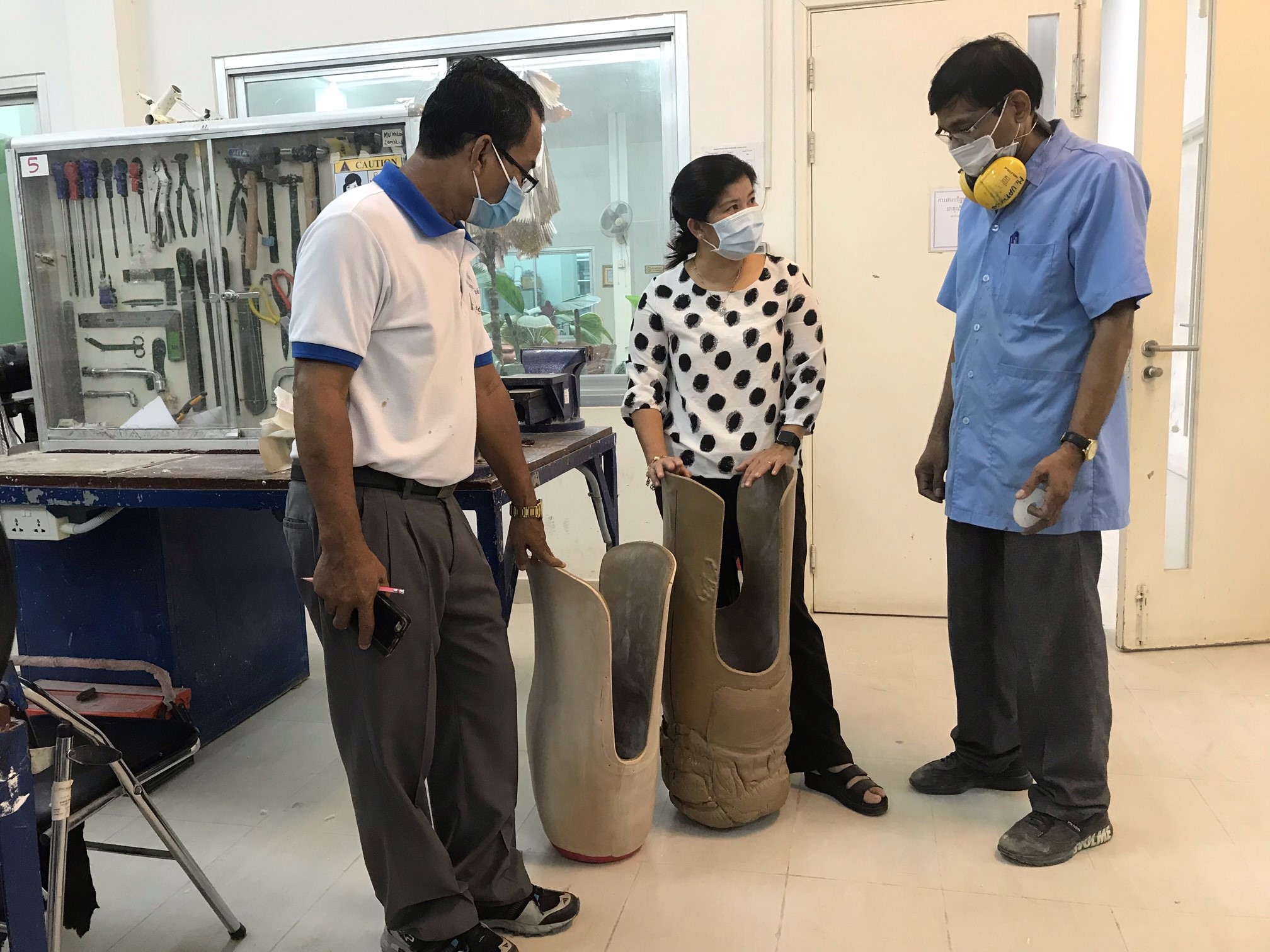 When Chhouk the elephant calf was found in March 2007 in Mondulkiri, Northeast Cambodia he was alone, underweight and had a severe foot injury. A wire snare had cut off his foot and his leg was becoming seriously infected.

Conservationist Nick Marx of the Wildlife Alliance rescued the baby elephant and with help from Exceed Worldwide, and an elephant named Lucky, Nick nursed Chhouk back to health and made him an artificial foot with the help of Exceed’s clinical team.

The team in Phnom Penh Physical Rehabilitation Centre worked tirelessly to create a limb that would enable Chhouk to walk again, leading on the design, materials, and repair of the elephant calf’s new foot.

Sisary said: “The team test different designs, and this time, for a more durable shoe, we draped stiff but flexible plastic. For a stay-on shoe, we added belts. For a comfy shoe, we padded it with foams.

“Chhouk’s shoe has two separate parts, a soft flexible inside shoe and a hard-durable outside shoe with a tractor tire on the bottom. Chhouk also wears special socks to prevent chafing.

“Every six months he needs a new shoe, and every time we work together to make one. So far, Chhouk has had 17 new shoes.

“Prosthetic limbs aren’t just for people; they can be for elephants too”.

Chhouk continues to thrive under the care of Nick Marx, his staff, and Wildlife Alliance at the Phnom Tamao Wildlife Rescue Center, where he has been since 2007. The centre is managed by the Cambodian Forestry Administration and is located on 5,600 acres of forest.

Chhouk and Lucky are just two of the roughly 1,500 animals that live there today. Whenever possible, Nick and his staff release the animals back into the wild and when that’s not an option, they care for the animal for the rest of its life.

Sisary is a PhD researcher within the University of Salford’s Centre for Doctoral Training in Prosthetics and Orthotics based in Cambodia and the research is generously funded by The Coles-Medlock Foundation.

With over 20 years of experience in prosthetics and orthotics education and clinical service management, Sisary has been providing life-changing support for people living with disabilities.

Based in Cambodia, her PhD research has focused on the application of social enterprise in prosthetics and orthotics for the sustainability, implementing innovation and measuring impact, and understanding public finance management.

She explained: “Over the last 20 years, I have, with the support from the team, been supporting people with disabilities living in poverty in South East Asia by providing free prosthetic and orthotic services.

“It is a delight to see our clients walk again, completing school, getting married, being employed, becoming leaders in their profession, generate independent income generation, and living a more independent life.

“There are still multiple challenges facing people with disabilities in less-resource fortunate settings, and we still have a lot to work through to promote a more inclusive society without leaving anyone behind”.

Nick Marx of the Wildlife Alliance described his experiences in working with Sisary and the Exceed Team.

He said: “I contacted several prosthetics organisations when it was clear Chhouk needed a prosthesis. Although they had no experience of making prostheses for elephants, it was only the Cambodian School of Prosthetics and Orthotics that volunteered to help. I am certain that Chhouk is the most successful prosthesis wearing elephant and this is thanks to the skill and dedication of CSPO and my staff at Phnom Tamao.

“The team at CSPO have been so helpful and easy to work with throughout and they are still involved today, repairing broken shoes and creating new ones. There is no doubt that Chhouk would have serious skeletal malformation without their support and ingenuity, indeed he may not even be alive today”.

The university is extremely grateful for the support of the Coles-Medlock Foundation and the continued support of the foundation will undoubtedly transform the landscape of prosthetics and orthotics.