Animation students from the University of Salford have announced that Hollywood star Ralph Brown will voice the character of ‘The Great Computer’ in their new comedy animation series ‘Big Fight 3’. 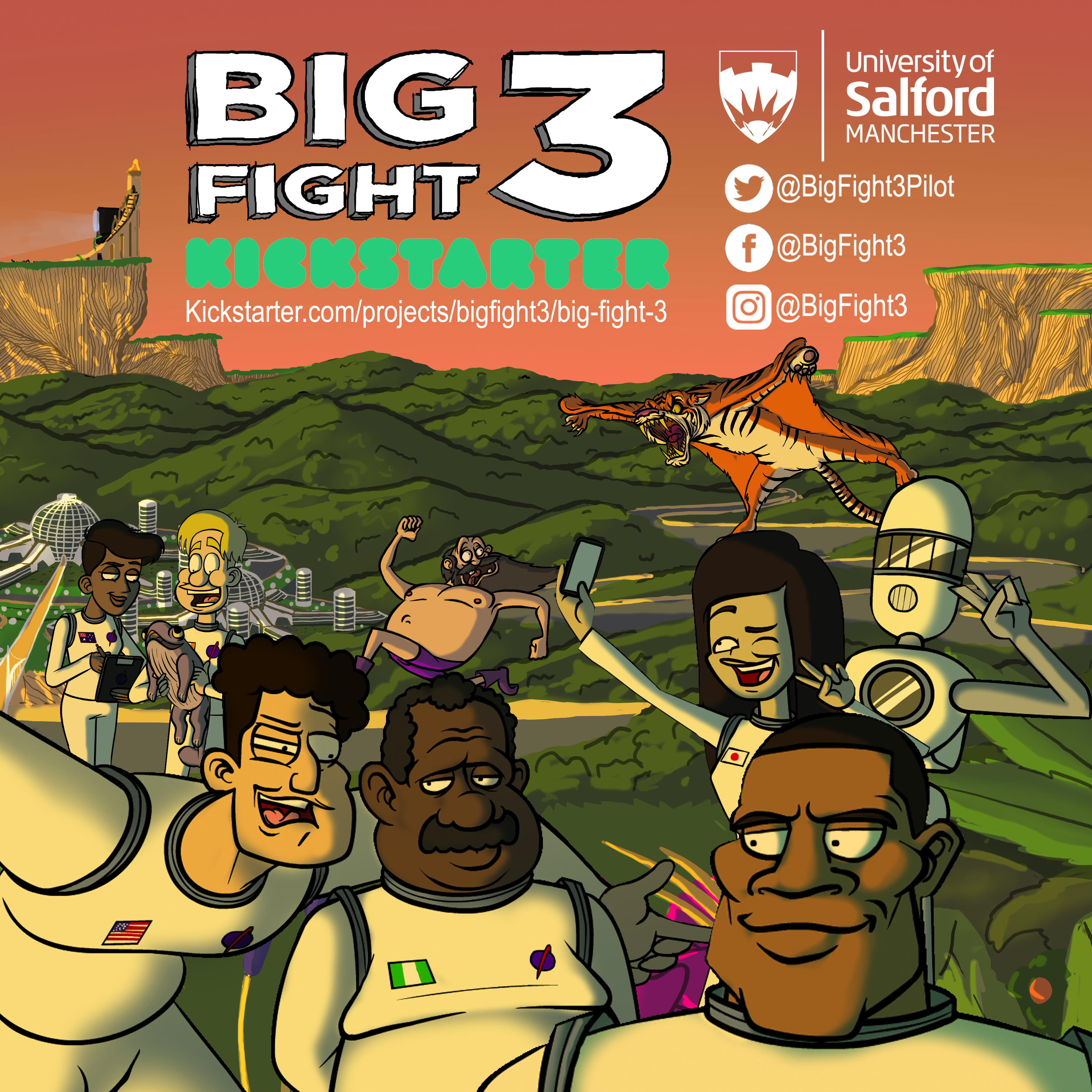 The cult actor, who has starred in the likes of Withnail and I, Wayne’s World 2, Star Wars, and Alien 3, will now join the cast of the show, which its creators hope to pitch to global media giant, Netflix.

Big Fight 3 is the brainchild of Adam Frith and Paul Reynolds from Leigh and James Lawson from Wigan. The trio are currently working with around 50 past and present Salford students to create the show.

Adam, who is in his final year of BA Animation at the University of Salford, which James graduated from this summer, said: “Ralph has got a brilliant voice and delivery. I’ve been a fan for years and we’re super excited to be working with him.”

The show follows the story of Earth’s first astronauts as they explore an alien planet to discover a ‘quirky utopian’ world until one of the crew goes rogue and ruins everything.

When speaking about the inspiration behind the idea, Adam said: “I was thinking about the 50th anniversary of the moon landing and how everyone was so optimistic for the future around that time. And the sense of global togetherness really inspired me.

That got me thinking about space and what if there were another earth with an alternate history and different attitudes to the ones we inhabit on Earth, and basically worked from that.”

James added: “We started thinking of weird customs for this planet and then started coming up with a history for it. We thought it would be interesting to explore a third world war on a different planet.”

The show is set on planet ‘Ria’, or Kepler 111b, as it’s initially known, where dinosaurs still exist and roam free, gender and sexuality are completely fluid, and the planet is ruled by a computer system.

Speaking of the concept, James said: “We wanted to make sure it felt inclusive. Ultimately, we want the show to be really funny, but we don’t want it to be at anyone’s expense, we wanted it to be a matter of fact thing and show how a lot of the norms and values we have in the real world are to do with history and the society we’ve been brought up in.”

Big Fight 3 also features an international cast, in order to have a ‘global appeal’ Adam explained. “We want people to be able to identify with the show. There are so many different cultures and heritages from countries around the world that we find so interesting.”

Adam, James, and Paul are currently working on a full 15-minute pilot episode which will give more of an insight into the storyline of the show.

They hope Burrell’s links with Netflix and other broadcasters will help secure a deal for Big Fight 3.

James added, “This is an out of this world idea, quite literally, and if we can take it to Netflix with the industry links we have I believe there’s every chance it could be a success.”

Looking to the future, Adam, James and Paul hope to start their own media company which could be used to produce the show, as well as creating jobs for future animators and writers.

Their Kickstarter has already raised 13% of the £25,000 goal needed to produce the show with 10-episode concepts ready.

James hopes the show’s originality, combined with backing from Ralph Brown, will stand them in good stead to secure a deal. He said: “It’s not very common where a British adult animation show has started at this grass roots level where it’s just a foundation of students.”

“This is not just a pipe dream - there is genuine talent behind this project.”