On International Day of the Midwife 2021, Dr Lesley Choucri, a senior lecturer in midwifery at the University of Salford, reflects on her 48-year career as a midwife, senior lecturer, researcher, manager, and leader. 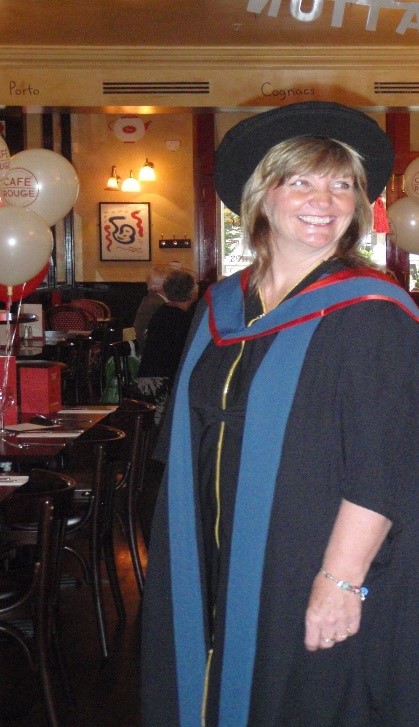 When Lesley was 15, she was inspired to become a nurse when a former pupil spoke to the class about her career as a staff nurse. At the first opportunity Lesley joined the local hospital as a cadet nurse in 1973, where she learnt how to ‘care with kindness, communicate, and walk in another’s shoes’.

Lesley completed nurse training in 1977 and midwifery in 1979, becoming a State Certified Midwife.

“I have a bottomless love for mothers and midwives and student midwives who have the deepest wells of strength and courage. I have the highest regard for my profession and what it represents to the world of bringing mothers safely to birth and the beginning of family life. I feel that many serendipitous moments propelled my career,” Lesley explained.

The 1980’s provided Lesley with her first promotion to ‘Sister’, leaving her hometown of Halifax for Blackpool in 1981. It was here where Lesley learnt how to become the midwife she desired to be.

She said: “I quickly realised that my pre-registration education was minimal, and it was time to really learn, I began my journey in education but there were many twists and turns to come!”.

Lesley secured a funded place on the Advanced Diploma of Midwifery at St Marys in Manchester in 1982, and on completion became ‘Senior Sister’ managing the delivery suite, postnatal ward and antenatal clinic.

Lesley proudly added, “Let’s not forget, it was on my interview day in Blackpool that I met my future husband who was introduced to me as the obstetric registrar and we had our children Daniel and Gabrielle during our time there”.

After Daniels birth in 1985, Lesley returned to work part time nights in her senior sister role. This was a normal transition for a new Mum wishing to continue with their career progression.

With Lesley’s husband becoming a GP the family returned to her hometown of Halifax in 1988.

“A new grading system had been implemented and all part time midwives would be ‘E’ grade regardless of skill set. I was frustrated in a system that did not support working midwife mothers to achieve their capabilities and aspirations”, Lesley explained.

Lesley honed her skills during long nights on the labour ward and would often be caring for three mothers during the shift.

“We grafted together!”, she said. “Supporting each other and working as a team running between those rooms! I worked part time for 8 years giving time and energy to my amazing children”.

In the early 90’s Lesley was leaving work one morning and saw an advert at the University of Huddersfield and the offer of a 2-year BSc in Health Care Studies for health care professionals.

“Yes! This was my chance! I could study and work part time so that when the children went to school, I would be ready to progress!” she said.

“I asked the Head of Midwifery to support an application to which she categorically said no, ‘you are not suitable for this due to your standing’. I went to the Director of Nursing who said, ‘why would you want to do this; you are only an E grade on nights’ That answer is burned in my brain!”

Lesley used all her persuasive powers to let them know who she was and what she was capable of, and how the unit would be enhanced by a degree educated midwife.

In 1991, Lesley would be the first midwife in Halifax educated to undergraduate level and her request for education was highly unusual.

“I told him I would pay for it and he said, ‘if you are successful in year 1, I will pay for year 2’ and he did!” Lesley explained.

“On this programme I unlearned, learned and relearned. It was the first time I had learned multi-professionally and the insights from others was immense. I learned from true academic role models such as Dr Annie Topping and Dr Martin Johnson. I was so privileged to work side by side with Martin when I joined the University of Salford as he was our Professor and my guru (supervising my PhD). The university life I experienced at Huddersfield set my mind upon becoming someone like Martin and Annie even though I felt it was a bit beyond my capabilities!”.

The degree was completed in 1993, which coincided with a significant change in midwifery practice and policy, one that would determine the second half of Lesley’s 48-year career.

Baroness Cumberlege and her team were charged with creating the ‘Changing Childbirth’ maternity policy following the Winterton Report of 1992.

Lesley was quickly asked to come off nights and work full time in a new role of Practice Development Midwife as she had ‘done research’ and was needed to design, implement and evaluate a new service, and deliver the Changing Childbirth policy with her.

“I had a joint appointment working with the teaching team at the University of Huddersfield and developing clinical services and practice in midwifery. I had the great fortune to work with Dame Jackie Daniels who was setting off on her own research and managerial journey in Halifax”, she said.

“This was the catalyst that propelled me to Head of Midwifery, Paediatrics and Gynaecology three years later. I also completed the MSc Health Professional Education during that time and became a teacher.

“What a turbulent time managing and downsizing three services, saving money, losing people, whilst building new day services to replace the loss of beds. The challenges during this time cannot be underestimated both personally and professionally. I learnt resilience in adversity and made the transition to full university life at Salford in 1998 where I enjoyed the second half of my 48 years!”.

Lesley described herself as an ‘unusual type’ for the teaching team who had never had an NHS manager as part of their group, learning and honing her teaching and learning craft from role models, Dr Margaret Chesney and Janet Nuttall.

During her second year at the university Lesley was asked by the Head of School to work with Dr Mary Price to create the first midwifery undergraduate curriculum, with the first cohort starting in September 2001.

“I had to draw upon deep reserves of innovation and leadership and drew together amazing people from practice, education and research. This work would not have come to fruition without Cheryl Shuttleworth (now Lenny) who was the Head of Midwifery at Hope Hospital”, Lesley explains.

“The programme we designed then has enjoyed many iterations but remains a sound and deeply woman centred curriculum, underpinned by problem-based learning, which has produced hundreds of Salford graduate midwives many of whom work in the Greater Manchester maternity services today and further afield”.

Lesley became the Director of Midwifery and Lead Midwife for Education in 2006 and led the revalidation events for every review and amend until 2015. “I recruited the best people throughout my tenure as Director and it is they who have delivered the highest standards of teaching, learning and care to our students. I salute them all for their energy, tenacity and scholarship”, she said.

Alongside working at the university, Lesley completed her doctorate in 2010, a large qualitative study in the Hope Hospital maternity unit with the then consultant midwives Deborah Carter and Kathy Murphy facilitating the work as part of the unit’s own quality drive.

As the Director of Midwifery at the university, Lesley has fought for Midwifery as a provision, ensuring it is seen as a ‘unique profession’ and to make sure it is adequately funded.

In February 2015 Lesley decided to make the decision to step down from Director to Senior Lecturer to reduce her hours to 2 days per week. Lesley described this as a ‘tidal wave of change for the team after many years of calm sailing’, adding the team ‘regrouped and stood firm!’.

Lesley was now able to concentrate on two elements in the latter stages of her career, bringing third year students safely to the completion of their programme every year and to do research.

Lesley said: “This brings me to the wonder of Facemums and to the force of nature, Dr Rose McCarthy, who had an idea that mothers and midwives could learn and care together using moderated social media sites”.

After an initial pilot, Facemums was rolled out successfully across multiple geographical areas in the UK and is being tested at undergraduate level with a version being offered globally.

“I had the privilege of being the co-principal investigator throughout and the Facemums team has produced numerous publications and demonstrated how continuity of care, (maternity policy in England) can be achieved to support mothers to come safely to motherhood using digital means”, she explains.

Lesley’s astonishing career has spanned almost 5 decades, coming to an end during the covid-19 pandemic, a seismic and unprecedented event that has made many re-evaluate their priorities.

Lesley explains, “My Mum and Dad now need a lot of care in their 80’s and we now have a beautiful grandson, Zachary! I have decided to work on family time and to retire and offer some consultation work. I couldn’t imagine a career any better than mine! My passion has never dimmed, my knowledge never diminished, my care for mothers, midwives and student midwives remains a constant flame.  A professional life fulfilled”.

Students mark 74 years of NHS with celebration at 10 Do...

Two Nursing Associate students from the University of Salford attended a celebration event...

Salford policing students invited to Paris for final of...

A group of policing students from the University of Salford have been named as finalists...