Cult survivor aims to help others with new business

Victims of cults could be helped thanks to a new business launched by a student at the University of Salford. 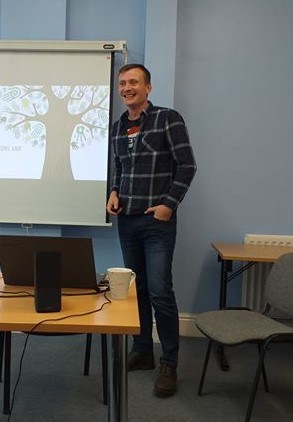 Richard Turner started his venture, To Think Again, to help ex-cult members work through their experiences, alongside studying for his master’s degree in coercive control at Salford.

Richard runs counselling sessions for ex-cult members to help them to recover from the devastation which can be caused, as well as supporting the families of those affected.  It has been estimated that there are between 500 and 1,000 cults currently operating in the UK.

The Launch @SalfordUni business incubator at the University of Salford is supporting Richard by providing access to office space and mentoring to help him build the business.

Richard himself worked for and attended the meetings of a Bible-based charismatic cult for three years in Liverpool. He was employed by them as a support worker for two days before he was offered a full-time position.

The cult teaches the Prosperity Gospel, a controversial religious belief where members are encouraged make donations based on the idea of ‘the greater the gift, the greater the divine reward.’

Richard, who has autism, explained that when he first started working with the charity, he thought that the culture and atmosphere was “odd”, but he didn’t think too much of it.

He said: “These cults all operate in similar ways. They slowly take more control and before you know it, they have taken over your whole life.

“I feel my autism may have made me more vulnerable and prone to being taken in by these people.”

Towards the end of his time in the cult more and more of Richard’s life was being controlled by the leaders, including his relationship with his then partner.

After leaving the cult, Richard returned to education to study for a master’s in Psychology of Coercive Control, the only course of its kind in the UK which examines how people are indoctrinated into abusive groups and relationships and what can be done to help people.

Programme Leaders, Rod and Linda Dubrow-Marshall, commented: “The alarming extent of harmful coercive control across high control groups, relationships and trafficking gangs means that we all must be better informed about how people are psychologically controlled and professionals need to be better trained both in prevention and recovery.”

Richard has also been running a training course in Cult Awareness with the next set of courses due to take place later this year.

The course is aimed at counsellors, educators, concerned family members and friends, and anybody else interested in learning how cult groups work and how to spot the signs of a cult.

Richard said: “I have already had a few clients, so the demand seems to be out there. The main aim is to help people spot the signs that someone is in a cult sooner rather than later, so that others can avoid the experience I had.

“The Launch @SalfordUni business incubator has really helped me get this off the ground with advice and assistance.”

Staff from the University of Salford also participated in the International Cultic Studies Association (ICSA) Conference in the summer which explored the issues of coercion and abuse across extremist groups, trafficking and abusive relationships.

Justyna Turner, Incubation Manager at Launch said: “This is a very sensitive but important area and its great that Richard is using his personal experience, and the resources of the business incubator at the University of Salford, to try to help vulnerable people.”

Why should we expect athletes to push through a mental ...

As the mental health of athletes comes under more scrutiny than ever before due issues...

A student who came second in a national law competition has nailed success yet again with...

Expert opinion: How the 'pingdemic' is affecting the su...