A large and extensive collection of photographic images relating to the history the University of Salford. The photographs cover a range of themes from buildings, royal visits, honorary graduates, staff and students. They provide a visual record of the institution’s complex history from its beginnings as the Royal Technical Institute Salford in 1896, housed in the iconic red-brick Peel Building at Peel Park.

Many of photographs featured in official institutional publications including the Vice Chancellor's Annual Report, copies of which form part of the physical University Archive. Some of the earliest photographs in the collection are promotional shots showing facilities, workshops and laboratories of the Building, Mechanical Engineering and Chemistry Departments of what was then the Royal Technical College (renamed in 1921) in the 1930s which featured in the annual prospectus. There are also several images relating to the School of Art, including an image of L. S. Lowry during a costume drawing class in the Peel Building.

The implausible Chemistry Tower in the 1980s. It was demolished in the early 1990s.

A stitch in time

A sewing class at the Royal Technical College in the 1930s.

The photographs show how the physical campus changed and developed, particularly in the 1960s and 1970s, at a time when tertiary education was expanding. There are images of the construction of the Maxwell Building designed for the newly established Royal College of Advanced Technology in 1957, followed by the Cockcroft Building, Chemistry Tower and Civil Engineering Building in the 1960s. Images of various architect's models are a useful insight for the wider masterplan and strategic vision for the University campus during the 1970s. The image of the Paternoster Lift in the now demolished Chemistry Tower is an example of the value of photography to capture aspects of the past that no longer exist.

There are lots of images of the University's First Chancellor, HRH Prince Philip, the Duke of Edinburgh, visiting the institution and opening the neighbouring Salford Technical Institute (later Salford College of Technology) in 1967. There are also images showing the visit of the Queen to the Royal College of Advanced Technology in 1961.

The photographs also provide an insight into student life in the 1970s and 1980s, with images of student accommodation including the Castle Irwell Student Village, Freshers Fairs, Rag Day and student demonstrations. Also in the collection are photographs of staff outings and Christmas socials, and staff and student sports teams in the 1940s.

The collection also provides a visual record of the University numerous honorary graduates which include the artist L. S. Lowry; the cellist Jacqueline du Pre; Lady Brenda Hale; the musician Peter Gabriel and the athleteRoger Bannister. 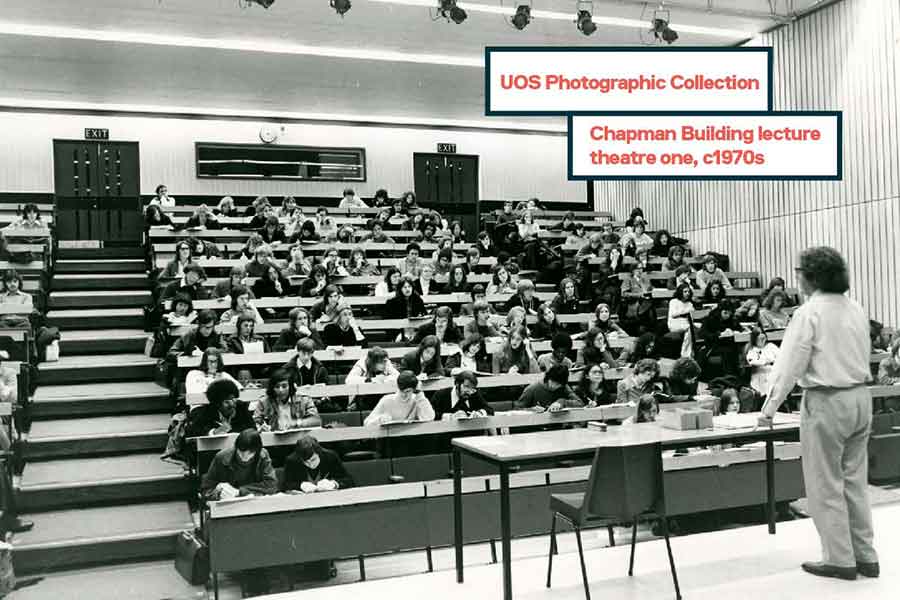 People interested in the history of the University of Salford; researchers and students of architecture; local and family historians.