Dr Roy Newsome (pictured below) founded the Brass Band Archive in the mid-1990s. The material was collected from a variety of sources, including from Dr Newsome himself, and other members of the staff teaching Band Studies at the then Salford College of Technology.

Take a look at the archive

How to search Brass Band News 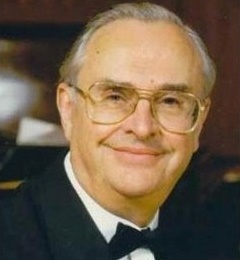 The archive included material from Wright and Round, a company established in 1875, which started publishing from Erskine Street in Liverpool. Henry Round was a musician and Thomas Wright a businessman and accomplished musician. They published brass and military music along with a printed publication known as the Liverpool Brass Band & Military Journal.

In October 1881, Wright & Round published the first of its monthly journals, Brass Band News. These appeared, without break, until 1958.

Wright and Round was taken over by Interactive Sciences in 1991, which was owned by three directors, Brian Last, Ken Sawyer and Roger Thompson. Roger, the musician of the three, was the driving force behind Wright & Round and it was his foresight that took them into the world of electronically produced printed sheet music. The company retained copies of Brass Band News, from the very first until almost the last. Most were bound in sets comprising a number of years’ editions – some bindings covering periods of up to ten years. The Collection was presented to the University of Salford by Roger Thompson in the 1990s. Sadly, there are a few gaps in the Collection, although we will endeavour to track these down and add them to the Archive.

In November 2009, shortly before his death, Roy Newsome wrote: “What I see as the most pressing need for the Archive concerns the almost unique set of copies of the journal Brass Band News…The ultimate aim for this work would be to have a complete set of copies digitised and available world-wide through website and internet.” We are proud to have completed this task, and to have made this digitised archive freely available to anyone around the world.