The University of Salford at MediaCityUK is right at the heart of the UK’s media and digital industries. With broadcast-standard video and audio facilities and the latest digital technology as standard, it’s suitable for even the most ambitious and imaginative events.

Our conference, meeting and creative studio spaces all use the latest AV and communication technology. We can accommodate everything from awards ceremonies and events to product launches, exhibitions and networking activities, small and large.

The Egg Foyer and Suite

The adjacent Egg Suite can be opened for larger events and demonstrations where video content can be projected onto a large format curved wall 'The Edge' and closed to create a meeting space for screenings and presentations. 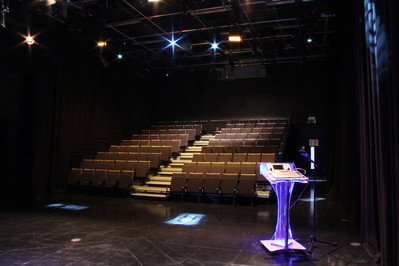 This versatile performance space combines the technology of a live theatre venue with a TV studio in a double height space. It is ideal for live performances, digital installations and collaborations, concerts, dance, exhibitions, screenings, conferences  and product launches.

A conference suite commanding spectacular views over the Quays enhanced by floor to ceiling windows.

Two large theatres that each seat 120 and can be divided to form 4 smaller rooms. There is also a large breakout space that can be used for catering and exhibitions as well as networking. With a cloakroom and small office also available for use the space is excellently situated.

With lecture theatres and classrooms of varying sizes (from 2 to 80) we can accommodate your event in stylish, comfortable surroundings with access to full audio-visual equipment.

Room arrangements are flexible and there are plenty of colourful and inspiring breakout spaces for networking and catering before or after your event, with plenty of power-points so that you can plug in your laptop to check emails on the go.

We have a variety of sized PC suites for hire to be used for training courses.

Our creative studio spaces include two industry standard HD TV studios including a green screen. These could be a great addition to your event – film interviews with your guests or even broadcast your event live as it happens.

These are equivalent to those used by industry including BBC, ITV and Sky. Features include:

Our creative studio spaces three radio studios capable of facilitating any productions and broadcasts.
As part of our on- going vision to produce highly employable graduates, by making use of these studios you will have access to our undergraduate and postgraduate students (fully supervised by University of Salford staff and technicians) who will be there to support your project. This could be from simple work shadowing to filming, direction and producing.

The three state-of-the-art radio studios can actually create broadcast material with equipment as used by the BBC. They are capable of being linked to every other audio room in the building, which could facilitate outside sources such as live bands performing within the TV studios.

The TV Studio contains a state of the art News set and includes three HD cameras with teleprompters.
Adjoining to the TV Studio is the Studio gallery, where the Director, Producer, Sound Mixer and other members of the team, will sit during News Bulletins and productions, controlling all the action. This studio also has the ability to link up to the other two TV Studios in the building based on the ground floor enabling live feeds.