We spoke to BSc Accounting and Finance student James Hodgson - Jones about his experience in obtaining a placement at Ernst and Young in Frankfurt, as well as how the placement has benefitted his skills and experience in industry. 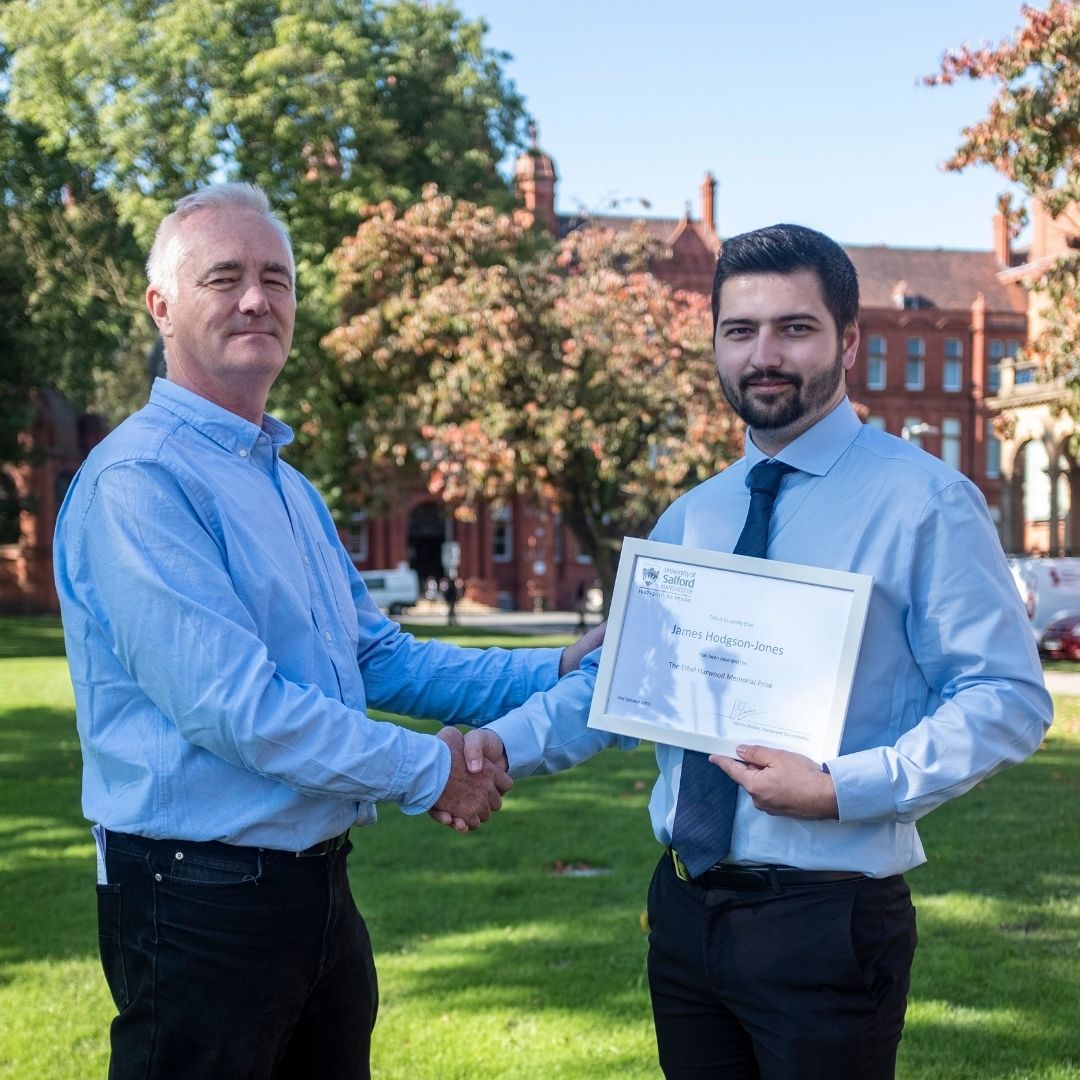 Getting the Perfect Placement

I completed my placement at Ernst and Young in Frankfurt, Germany. I was based in Advisory but also was doing some audit work.

you have to apply for a lot of different placements. It’s competitive, especially since I was mainly applying in London because everybody in the world wants to work in London. Then you get places like Frankfurt, which are really short staffed, they are looking for interns and graduates, so there are really big opportunities in places like Frankfurt.

I applied to a lot of jobs in the UK including Ernst and Young in London, which I didn't get. I was trying to find out how to apply worldwide and across Europe and I ended up just emailing the top 10 firms abroad in Paris, Germany and Amsterdam and this was the only one that replied. They offered me a phone interview and  after that I had a Skype interview with a partner.

In Germany, they tend to do internships for three to four months. So when I said I was looking for a year, they were actually really happy.

I was actually learning German through Duolingo but all the work was mostly in English, everything's reported in English,so thankfully a language barrier wasn't a problem.  Frankfurt is really international, you have people from everywhere.

The first two months I lived in an Airbnb, which was fine. It's a lot different in the UK, you can go to an estate agent and just say I want to rent and they take you out.  In Germany, they don't have estate agents on every high street, it's done online a lot, which is hard, because I didn't speak fluent German. A colleague then said he had a place in his building available and managed to set it up for me. It's right in the city centre, 15 minutes to work, so it turned out really well in the end.

I flew back to England every two weekends; I just booked flights in advance.  You have so much holiday, you have 30 days holiday as standard, and then 10 bank holidays. So I had 40 days and they encourage you to use it. It was easy to pick off a couple of Fridays every month.

It was really daunting the first day.  There were two and a half thousand people working there.  It's just crazy. They have about 50 interns because they have new interns every month and they always start on the first of the month.  We’re all waiting to be taken up, you're just waiting for your name to be called.  But then, once you get started, you discover everybody else is in the same position.  I had a few interns who I was with in the first few months and then in my final four, five months I was giving the interns tasks and teaching them, which was good.

When I first joined, I was assigned on a US tax project.  My first task was taking all these financial statements from companies around the world.  We had to translate them and input it into the EY system. We'd have a list of things to look for: what tax did they pay, what profit or revenue, stuff like that. The financial statements would be in different languages so we'd have to use Google Translate so that in our system, we'd have the profit of these companies all broken down. That was for the first month.

Over Christmas I mostly did audit work. I was based in a mechanical company and was in charge of pay roll. I learned the most in those three months. They were long hours and hard work, but it was a smaller team, I was with a partner or with a manager and actually got really good experience. I also did my Audit ACA exam during that time. It all kind of linked in, which was great.

After Christmas, I went back into the same project I was on before but this time, I was more client based, emailing companies and requesting information which we didn't have and stuff like that.

The best part was definitely when I worked in Advisory, it was nine to five and really relaxed, you have a big team so your tasks are a bit easier and spread across loads of people.  Whereas Audit is quite tight, it’s longer hours and really fast paced, because you have tight deadlines. Audit was the hardest, but I think I learned so much from it; about Audit in general and the basic skills you need.  Working on Excel, you pick it up so much quicker when you're in a fast-paced environment, picking up shortcuts and stuff.  You also develop your soft skills, you have to email clients a lot.  My manager would review my emails and teach me how to word things. When I go back to Germany next year, I've asked to do six months in Audit, six months in Advisory, so I get a bit of a break.

I'm so thankful that I get to go back. my contract starts first of July.  In my final month, my counsellor was asking, What are your plans? Why don’t you apply here? I said, Okay, how do I do that? He told me to come with him, we sat down with the partner and I actually managed to negotiate a promotion! So I’ll be going as an Associate Level two, rather than starting as a Graduate Associate. That was a big deciding factor for me going to Germany because it’s a big move but I plan on staying there for at least two years.

The placement has definitely been the most important part of forwarding my career.

A Typical Day in Placement

It depends. In Audit, it was waking up very early. Travelling to the client, it's a lot different from being in the office, you're at your laptop with coffee constantly.  It's a lot more client based because you’re actually at the client’s office. So you pop around asking questions and you get home quite late. The week can be quite tough. Audit is like consultancy, you go out to the customer and the customer expects you there at nine o'clock or earlier.  We tend to be the last people to leave too, because that's what the client sees. They're paying big money for it so they expect more. There was also a lot more work, because there were only three of us in the group but you learn so much more in that environment, you're working close up with higher people, people who have experience.

Then, in Advisory, I had a bit more of a lie in! The office is a huge building, you can sit wherever you like, there's no set seats.  Everything is glass, open plan, even the partners don't have a private space, everything is transparent. It's a bigger group so it's more social. You go for lunch with a big group of people. You finish at five o'clock and everyone rushes out.

The modules I studied are really good. You get a broad range of modules so you do learn a lot. It's really hard to prepare yourself for work. People do different placements. So it's hard to say, Okay, we're going to learn this and you'll be able to apply it at work. When I had to do my feedback on what I could have learned differently, the only thing is, I think, more Excel based learning. You really underestimate how much you use Excel when you go into work.

My University Supervisor had Skype interviews with my counsellor from EY, we were constantly emailing. This meant that they were always in communication and making sure I was set up for the job and getting on well.

Coming to Salford has been great experience and I’m looking forward to finishing my final year.

My aim is to become a manager at one of the big four firms!

When I join as an Associate next year, it’s automatic progression up into Manager. So in two years I become a Senior, then I think it's another three years and I become Manager.

The money in London for graduates is nothing like Frankfurt, they offered me double what London was offering me, but then it changes. When you become a manager there’s more money in London. Once you hit Senior, you have so many options to go for. They encourage you to go to the US for three months. They say it's crazy, working seven days a week, but the amount you learn in those three months is something you learn in two years elsewhere. When you have had that experience, you can then go anywhere in the world.

I hope to complete the professional qualifications in the next two years. Of course, Salford has the most accounting exemptions you can get.  It was one of the main reasons for coming to Salford, because I knew I wanted to do the ACA qualification and, out of the universities I applied for, they were offering the top exemptions.

Definitely do a placement. It prepares you so much for the real world and you learn so many skills.  You learn the knowledge at university but you can really apply it when you're working. It's definitely the best thing you can do.