The UK is experiencing a boom in film and television production right now with opportunities aplenty for North West graduates to secure work in this frantically-paced industry.

The presence of MediaCity in Salford, which has become a regional beacon for television production and the opening of the new 85,000 sq ft Space Studios in Manchester has helped bolster these opportunities with 45 major TV dramas and feature films shot in the wider city region over the last three years.

One of the key aspects of this industry is production and stage design which involves several teams working together to pull together the look and feel of the sets that feature in these productions. These are specialist roles which have grown in demand within the UK over the last decade with the aforementioned rise in production leading to a unique skills gap in the industry with courses only offered at a small number of universities.

In 2017, the University of Salford sought to address this gap by establishing the BA Film, TV and Stage Design course. With the MediaCity campus and a plethora of industry contacts within arm’s reach, the course has since gone on to create a pipeline of opportunities for graduates to directly break into the industry.

From world famous dramas such as the BBC’s Peaky Blinders and the Sean Bean-led Time to television classics such as Coronation Street, The Voice and Pointless to designing stages for large events such as Soccer Aid and The Late, Late Show with James Corden, course graduates continue to rapidly establish themselves in this competitive field after learning a variety of skills here in Salford.

Emma Dibb, the course’s programme leader and a working production designer, set up the course to capitalise on the number of opportunities available to graduates and help address the industry’s skills gap which showed no signs of slowing down.

She said: “The industry vitally needed this course. Previously, there was a lot of in-housing training schemes at studios for these roles but over the years they disappeared and with the rise of production in the UK, we were entering a perfect storm as productions became chaotic and specialists had to rely on American crews.

“It was clear that we needed this course where we could train students up and prepare them to go straight into the industry and hit the floor running. There are similar courses in Nottingham, Cardiff and London but nothing quite like this in the North West. With the establishment of MediaCity, there is a lot more work here now than there has ever been before. I’ve never known it to be as busy.”

Not just specialising in film and television stage design, Emma’s course teaches students how to design sets that appeal to all cultural performances such as theatre, dance and performance stages for music artists which Emma hopes will lead to a number of opportunities for partnerships with Factory International when it opens next year.

Emma, who redesigned the BBC Blue Peter set at its home in MediaCity, added: “I’m trying to find as many opportunities on our doorstep as I possibly can for our students so they have as many career options as possible available to them.”

Georgia Long, 24, has gone on to work as an art director on several television productions made by the BBC and Amazon since graduating in 2020. She decided to stay living in Manchester due to the amount of work opportunities in the city and across the North of England.

She credits the course’s ‘all-round’ approach to developing skillsets in stage and performance design in addition to television and film as crucial to getting her interest when she applied to universities.

“I had been very fixated on London initially, but the courses there just weren’t well-rounded enough and I just didn’t want to miss out on the broader aspect of design that Salford offered.

“All of the tutors were working in the industry, so you didn’t just get a teachers’ point of view, you got a professional one as well and we were taught to learn the aspects of what the industry was looking for. It blew me away as a course and I got a lot more from it than I thought.”

Georgia has seen a rapid rise through the sector after progressing from the entry post of a runner to the prestigious post of art director within a year of working in the industry. She says the course played its part in her ascent through the ranks.

“The course is there to give you what you want but you really have to want it. All the tutors are working for you and you soon learn that it’s all about your reputation and how dedicated you are to the craft.

“Ultimately, the course taught me everything I needed to be an art director and that’s why I was able to do the role so quickly.”

“It feels like I was in the right place at the right time.”

Lorenzo Butturini, 24, has also been in almost continuous employment in the industry since graduating in July 2021 and has worked on creating sets for a number of prominent live talk shows such as The Late, Late Show with James Corden when it was filmed in London, the Sh**ged Married Annoyed live show from the podcast duo Chris and Rosie Ramsey and the stage for the performers at Soccer Aid at the London Stadium.

He said that the course really helped him identify what he wanted to pursue with his career as he’s taken on a variety of roles in art and production design departments.

“I am still not really fixed on what I am doing as I’m still trying a lot of things out, but that’s the benefit of the industry, as there are so many different jobs in production design. I have been very lucky to get a lot of jobs since graduating and I think it’s been a case of being in the right place at the right time and the course has really helped with that.”

The work shows no signs of letting up for Lorenzo who has been working on the revamped reality series Big Brother, a new musician-based talent series and the hit BBC one quiz show Bridge of Lies. 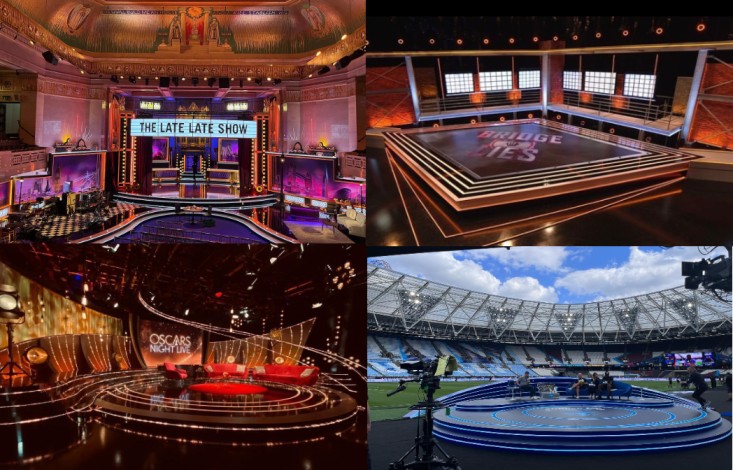 “I would not have got those opportunities had I not done this course.”

Grace Harrison, 21, graduated this July but has already quickly established herself in the industry, working on a CBBC show the week after, before taking on a role with the Ninja Warrior UK team at Manchester Central and then heading down to London for a production based around drag queens.

She is now working closely with acclaimed production designer Dominic Tolfts who’s led on the designs for shows such as The Voice UK and Michael McIntyre’s Big Show.

On the decision to study at Salford, she said: “There’s not a lot of universities that offer this subject and I chose Salford as it had a lot better connections with the industry and it showed examples of where the graduates ended up working. The course also gives you a lot of opportunities to try out a variety of different specialisms and you get a lot of time to figure out what you want to do.”

Grace credited the course’s industry connections as key to giving her the contacts, work experience and inside knowledge she needed to make her fast start.

She said: “Emma would bring in a lot of her industry contacts to come and talk to us during the course and that was really helpful as we heard a broad range of views from people working in art, props, set design and production design. It felt like she brought in half the BBC over my time there.”

“I’ve been able to find work quite easily since graduating and I don’t think I would have got those opportunities had I not done the course.”

Image below shows Grace Harrison in a art production studio. 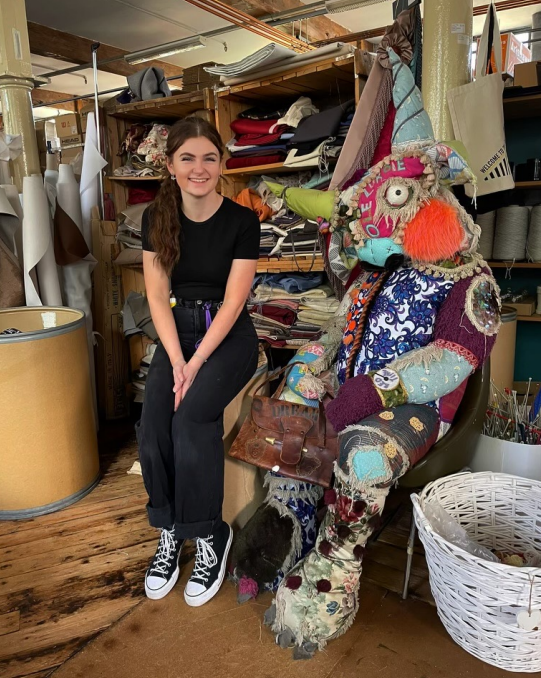 “With the course leader working in industry, you just know that they know what they’re talking about.”

Lydia Moorfield, 22, is another recent graduate having collected her degree this summer and is the stand-by art director on Coronation Street, which films just a short walk away from the University’s MediaCity campus.

“Two people from the show’s design department had come to our degree show so I’d met them previously and I think that then helped when they put the online advert out for the role, as I was successful at getting the position,” she said.

Lydia said that she always wanted to work in film and television production and was able to find work on several productions and short films before landing the position.

As a student who had her teaching largely affected by the pandemic through her first two years, she credits Emma for her role in ensuring that students did not miss out on opportunities for industry collaboration.

She said: “Throughout the pandemic, Emma did what she could to help keep us learning how to do the job. For example, we would have online meetings with production companies to get a grasp of what we could do. With the course leader working in industry, you just know that they know what they’re talking about and it really made a difference.” 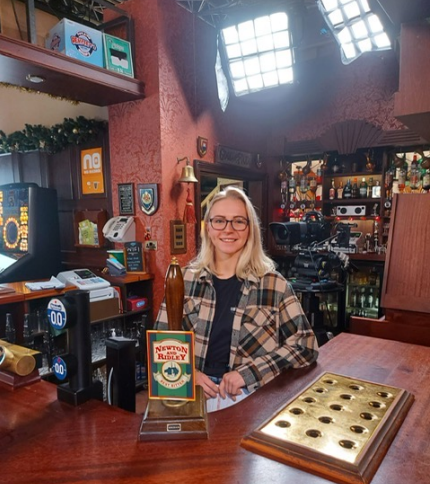 “People will remember you if you stand out”

Whilst all the graduates credit the course as being integral to securing employment in the industry, they also gave their words of wisdom for the course’s current students and those potentially eyeing a career in stage and production design in the future.

Grace advised: “Use university as your time to figure out which roles you enjoy the most and then you can decide what you want to specialise in. Make friends with people in workshops as you can learn so much from others and you’ll need to get on with everyone so you can ask for help when you need it.”

Georgia said: “Just by learning in Salford and at MediaCity, you are going to meet people. You’ll be taken around the studios, meet producers and fellow designers so my advice would be to use these connections and make sure you stand out as people will remember you.”

Lorenzo added: “This is a high-pressured, intense job and you’ve got to be willing to give all of yourself into it and not be naïve about it. The University will teach you a lot and you will get guidance and support on how to manage the pressure but make sure you are prepared for it.”

Finally, Lydia said: “My advice would be to do your best to get as much experience as you can over the summers between your studies and don’t be too disheartened if you don’t get it. Just keep trying.”

You can read more about our BA Film, TV and Stage Design course here.